Geraldo Trashes Pamela Geller: ‘Every Time I See Her on TV, I Want to Take a Shower’

Geraldo Trashes Pamela Geller: ‘Every Time I See Her on TV, I Want to Take a Shower’ 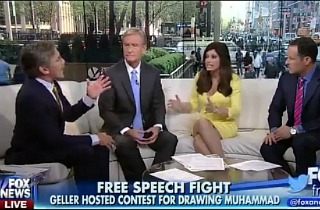 Fox & Friends had Geraldo Rivera on the show Friday morning to discuss Pamela Geller and the shooting incident outside her “Draw Muhammad” contest. As you might expect, given his recent comments, Rivera had a plethora of harsh things to say about the anti-Islam activist.

“She most reminds me of the Aryan Nation, KKK, racists,” he said. “I see them on television now and I feel like taking a shower.”

Tell us how you really feel.

“If Pamela Geller, if you put ‘Jew’ in there or ‘Irish’ in there or ‘black’ in there, any other groups, she would not be given the tolerance to spew her hateful rhetoric,” he continued. Naturally, the Fox & Friends hosts disagreed, trotting out the argument that, of course, such speech never justifies being targeted with violence.

Rivera agreed that the terroristic response is terrible — the two gunmen “got exactly what they deserved,” he said — but that hateful people like Geller need to be shunned for their instigative speech.

Of course, Steve Doocy replied that Christians are “often targets” of negative speech in America, but no violence is returned. And Rivera replied: “That’s nothing like this organized campaign to incite, to insult…. [A]nd it is bad for the Jews. It makes us look like we are all as hateful as Pamela Geller. She plays right into their propaganda. It is absolutely appalling. And every time I see her on television, I want to take a shower.”

He must’ve taken lots of showers this week then.

But wait, there’s more: “Look around this diverse, wonderful Fox News where we work. Pick any group. Would any other group tolerate this taunting and inciting? We wouldn’t speak to that person. We would shun her if she picked on any other group but Muslim.”

And then, regarding her attempted killers meeting their maker: “It does not in any way make me feel any better about Pamela Geller spewing her hatred and making us all look like the intolerant jerks they are saying we are in the Middle East and elsewhere. She does not do this country any good; she doesn’t do Jewish people any good. She doesn’t do anybody any good except self-aggrandizing, attention-seeking spewing of hatred that I cannot tolerate.”