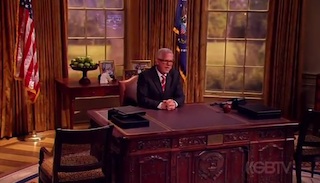 Keith Olbermann, now’s the time where you should take note. This here? This is why you create your own network instead of moving to someone else’s. Remember when you asked for an incredibly expensive desk and the Current people said boring stuff about how “That’s not possible” and “You knew what kind of money we had when you signed on” and “Did you really just buy that desk without asking us?” Well, when Glenn Beck wants a fancy desk, he just has his own network buy him the Oval Office set from the movie JFK so he can make overly dramatic weekly addresses to his audience.

RELATED: Yes, Glenn Beck Has A Brand New Set…As Well As An Exact Replica Of The Oval Office

So, what’s Beck’s first address all about? Well, sitting in his exact replica of the President’s chair, he explained how different our country has become over the years. And, really, you can’t argue with him. I mean, I bet there were times in this country’s history where a guy in a southern state proclaiming to have his own version of the White House and talking about how wrong the folks in Washington DC are would be considered a very serious thing. I can’t put my finger on any specific incidents but I’m sure they’re out there.

“It will be easy to go back to the work of rebuilding our communities without the distraction and red tape created by every new law and regulation that comes out of Washington D.C. We will simply do the work that needed to be done.

That’s where America’s renewal will begin. I wish we could take the time to unwind Washington steadily and slowly, but I am afraid we are running out of time. We have to simply cut the cord, and let Washington go.

I know that will hurt home values in metropolitan Washington, but that’s how these things go when you live in a one company town.

And if Washington can’t understand that, there are plenty of Americans who know what that’s like. And if Washington is willing to listen, America is ready to share what it knows about resilience.”

We here at Mediaite can say, without one question, that there’s at least one thing Beck’s address has that’s much better than the real Oval Office addresses; an inspirational soundtrack. Get on that, Mr. Obama.