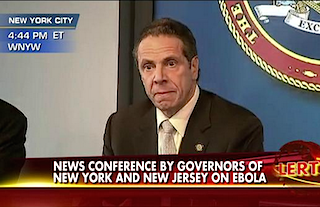 One day after New York City Dr. Craig Spencer tested positive for Ebola following his return working with patients in Guinea, New York Governor Andrew Cuomo and New Jersey Governor Chris Christie announced new guidelines for health workers that go beyond the recommendations of the CDC. Starting now, all doctors and other health workers who have had contact with Ebola patients must be placed under a 21-day quarantine upon their return to those two states.

“We were operating under the CDC guidelines, which we assumed were appropriate guidelines,” Cuomo said in press conference Friday afternoon, speaking on behalf of himself and Christie. “I think we’ve learned that we need to go further than the guidelines, that’s our basic point.”

Cuomo praised Dr. Spencer as “a valued fellow and a volunteer” who was “doing great work,” but at the same time chastised him for not following the “voluntary quarantine” guidelines put out by the CDC. “So, we have to do more,” he said. “It’s too serious a situation to leave it to the honor system of compliance.”

It has been widely reported that the day before Dr. Spencer went into the hospital for tests he had taken the subway to a Williamsburg bowling alley and returned home in an Uber car. However, he had been monitoring his own temperature twice a day since he returned from West Africa and once he had a fever immediately called 911.