Nick Di Iorio is a Republican challenging New York Congresswoman Carolyn Maloney in this year’s midterms. Maloney, a Democrat who’s been serving in the House of Representatives since 1993, recently traveled to China in an effort to bring two giant pandas to New York.

At the time, Di Iorio reacted by saying, “Israel is in peril, the border is mess, 92 million Americans are out of work, the IRS is running amok with lying to Congress and in full cover-up mode right under Carolyn Maloney’s nose, yet she turns a blind eye to these serious issues in favor of a photo op with a panda.”

When she returned from China, Maloney said she’s on the first stages of getting the pandas over to the Big Apple.

I say all this to give some context to these two strange photos BusinessInsider’s Colin Campbell shared earlier today from a Di Iorio press conference:

So you’re probably wondering why Di Iorio had the panda at his press conference, right? Well, Di Iorio explained that if Maloney wants to bring a panda to New York so badly, he’s already taken care of it for her:

“I’ve adopted my own panda. This is Kevin. Kevin is here to be the panda that we’re going to bring to New York City. And now we can get that off the table and focus on the real issues. Today we have one of the most important crises in New York City. Ebola has come to New York and we don’t have the leadership.”

And then there’s this image from the ad now featured prominently on Di Iorio’s website: 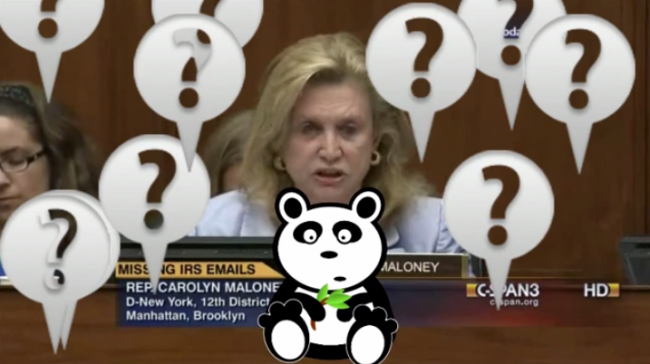