Gretchen Carlson: Hosting Fox & Friends is ‘The Same Thing As Being The President’ 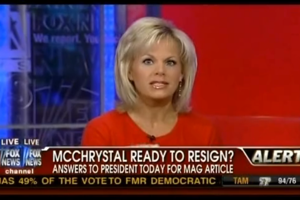 While Gen. Stanley McChrystal‘s military insubordination via ancient music mag garnered some sympathy for President Obama in a news cycle where he was already facing two wars, the worst environmental disaster in history, and a surge of opposition in Tuesday’s run-off elections, Fox & Friends’ Gretchen Carlson went one step further and offered the President empathy– because his job is “just like our job.”

The comment came up in a discussion on President Obama’s as-of-then unknown decision on whether to keep Gen. McChrystal in Afghanistan, and the difficulty making of surprise emergency decisions when in such a high position of power. To Carlson, that is simply the name of the game, and it’s all too familiar:

It’s just like our job– from a day-to-day basis, a lot of times where there’s big breaking news, we just sort of roll along. But what’s the role of an anchor during huge breaking news? Remember growing up? You tune to the television, and during that one moment during the year, they would have to carry a story all alone. It’s the same thing as being the President of the United States.”

To play devil’s advocate, it seems that Carlson’s point is that news anchors are put on the spot and expected to carry the weight of emergency stories as they deliver them to the country, just as the President carries the whole weight of that story alone when he handles the situation. And Carlson, despite saying “our job,” later seemed to clarify she was talking more about the Walter Cronkites and Edward R. Murrows of the olden days, not the sunny faces that greet rising workers. Still, at a moment when most of the media found in the McChrystal story a moment and subject with which to sympathize and join with the President, it doesn’t make for very good antics to compare a gig waking people up with lighthearted fare to being the single most powerful person in the world.

Video from this morning’s Fox and Friends below: