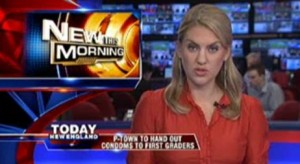 The New York Daily News picked up the amazing story, this morning, about a school district in Massachusetts that voted unanimously to begin giving out free condoms to students who request them…even if they’re in first grade. In other news, the demand for the Cootie Shot has begun to skyrocket.

Just so you don’t think that the school is just handing out rubbers willy-nilly, the article explains that students are required to speak to the school nurse or a trained counselor before they can procure their condoms. Still though, there’s another aspect to the decision that might send adults into a tizzy (if they aren’t already furious about the whole “condoms for first graders” thing to begin with).

“The committee also directed school leaders not to honor demands from parents who object to their kids receiving protection.”

Normally, I’m all for this kind of thing. I believe young people should get honest sexual information and I don’t think there’s anything more destined for backfire than abstinence-only education. But still…first graders?! Was this even a concern? However, I do think that anyone worried that this will lead to a bunch of six-year-olds having sex is probably barking up the wrong tree. The real concern is obviously for the school janitors who are going to have to spend every waking minute cleaning up tons of spermicidally lubricated water balloons.

You can read the Daily News piece here and check out a report by the NBC Boston affiliate WHDH below.