Gun Advocate to Bashir: ‘Do You Have Any Remorse’ for Those Killed in ‘Your Gun-Free Zones?’
video

Gun Advocate to Bashir: ‘Do You Have Any Remorse’ for Those Killed in ‘Your Gun-Free Zones?’ 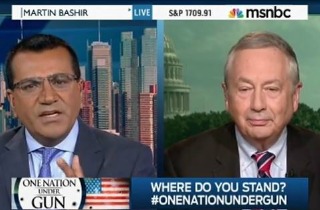 Executive Director of Gun Owners of America, Larry Pratt, appeared on MSNBC with Martin Bashir on Friday to debate the need for stricter gun laws in America. Pratt insisted that the common thread connecting all recent incidents of mass gun violence are gun-free zones. Pratt pressed Bashir to say whether he has “any remorse” for supporting those gun-free zones.

Pratt began by insisting that Washington D.C., where the last mass shooting occurred, is a gun free zone, just as are military bases.

Julian Epstein began by refuting the argument that gun-free zones increase the incidents of violence.

“This is a nonsense argument,” he insisted. “This is a weasel argument.”

“It’s particularly a weasel argument, because it ignores the fact that when a society that is awash in guns, that guns — even if you have a more restrictive place — guns can be trafficked into that restrictive place,” Epstein continued.

“Two days,” Bashir began addressing his question to Pratt, “after the massacre at Sandy Hook…”

Bashir continued with his question, asking Pratt about an editorial he wrote blaming the schools which banned guns for the massacre at Sandy Hook in 2012.

Pratt cited a recent instance in Oregon where a shooter was convinced to kill himself rather than fight an armed populace. “That’s what should happen in these schools and other places where folks like you won’t let us protect ourselves,” Pratt insisted.