Herman Cain Agrees To Debate With CNN’s Piers Morgan, But Only With Moderator

Herman Cain Agrees To Debate With CNN’s Piers Morgan, But Only With Moderator 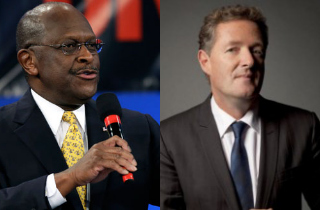 Yesterday afternoon we reported that CNN’s Piers Morgan repeatedly challenged former GOP presidential hopeful Herman Cain to a public debate. Initially it seemed as though Cain was reluctant to appear with the CNN host, but on his radio show today, he said he’d debate Morgan… but only with a moderator present.

The Daily Caller’s Jeff Poor reports that on his radio show this afternoon, Cain said, “I would welcome a debate with Piers Morgan — on his show, on my radio show — if he were to allow a moderator to moderate the debate between the two of us.”

Cain said he would need a moderator because “[Morgan] calls a debate when he gets to talk over people. He gets an opportunity to frustrate whoever it is he has on the show. And so I’m going to issue a little counter to him. I’m not scared, but it’s going to have to be with a set of rules where we both go by the same set of rules. I’ll bring him on this show and debate him. I’ll debate him in studio, but we’re going to have a moderator.”

The former GOP candidate also boasted about his debate skills, pointing to his performances during the 2012 primary debates. “I have debated presidential candidates for God’s sake. And I’m going to be afraid of him?” Cain said. “He has a green card. He’s not even a citizen of the United Stated of America … and Ted Nugent summed it up — Piers, leave us the [hell] alone.”