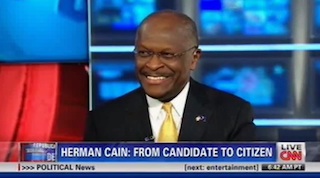 Earlier today, Herman Cain stopped by CNN to discuss his life post-candidacy and he was asked about one of his most headline-grabbing activities; his partnership with Stephen Colbert. CNN’s Kyra Phillips asked him if he was worried that Colbert was “using him for a punchline.” A thoughtful Cain responded that it was a “mutual use.”

Echoing comments he made to Neil Cavuto last week, Cain explained that, as much fun as he’s having with Colbert, it’s also a great way to talk to the young voters of America.

Cain also talked about the candidates he left behind, calling their continuous attacks on each other “divisive” because “they’re not divisive on solutions.” He did, however, say that either Newt Gingrich or Mitt Romney could beat President Obama but he wouldn’t endorse anyone in particular. Phillips pushed him, reminding him that he said at the beginning that America needed a businessman president, but Cain would only offer a few pro’s and a few cons for both.