How Much Did Cable News Networks Cover Freddie Gray Before Buildings Burned?

How Much Did Cable News Networks Cover Freddie Gray Before Buildings Burned? 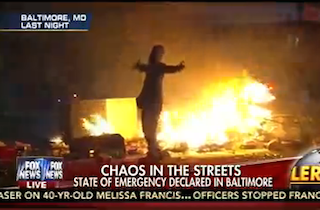 Since Baltimore erupted into violence this weekend, many have savaged news networks for only paying attention to the outrage over the death of Freddie Gray once buildings were on fire. In his comments Tuesday, President Barack Obama critiqued the media for covering the violence over the peaceful protests that preceded them; his criticism was echoed by Jon Stewart last night. One MSNBC host was asked point-blank by a protester, “Why does it take a catastrophe like this in order for America to hear our cry?”

Must a CVS burn to get the media’s attention? Not quite. Two of the three major cable news networks were in fact covering both the investigation into Gray’s death and the peaceful protests for the week leading up to the tumult.

Using TVEyes.com for research, a Mediaite study of the networks’ coverage* from April 19, the day Gray succumbed to injuries sustained while in a police van a week earlier, to Friday, April 24, the day before the protests escalated, found lopsided coverage. CNN covered the case 154 times; MSNBC covered it 82 times; Fox News managed only 20 references to Gray and the surrounding outrage.

The difference was qualitative as well. CNN dispatched high-profile reporters like Joe Johns and anchors like Brooke Baldwin to Baltimore early on. The network interviewed the attorney for Gray’s family several times, talked to forensic experts, others who had been the subject of abuse from the Baltimore police, and even suspects previously injured in similar police vans.

CNN and MSNBC also carried a number of press conferences related to the case, and treated new developments as breaking. Their segments were long, sometimes greater than ten minutes, and featured prominently in the A and B blocks of the news hour; often the story was covered two or three times per hour.

By contrast, Fox filed only a few investigatory reports on the story; a number of the network’s mentions came from brief news updates lasting under thirty seconds, and many only appeared overnight.

This is by no means CNN’s coverage hasn’t been troubled: When the protests intensified Saturday night, CNN was 40 miles away covering the White House Correspondents’ Dinner, for which it was justifiably roasted; neither did the network exactly distinguish itself once the riots began.

Nor is it to absolve the cable networks of a disaster-lensed approach to news. Between noon on Monday, just before the actual “rioting” started, and noon Tuesday, CNN mentioned Freddie Gray’s name 96 times, versus 78 times for “CVS,” meaning the non-human casualty of the protests threatened to subsume, at least on the television, the human cause. (Ahem.) For MSNBC that ratio was 141/64; for Fox News, 84/65.