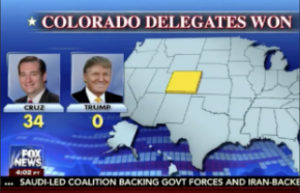 Donald Trump doesn’t usually take things very well whenever his presidential campaign hits a roadblock on its promise to win, win, win. As the Republican Party closes in on the increasing likelihood of a contested convention, Trump is once again blasting the “corrupt” and “totally unfair” nomination process that cost him Colorado this weekend.

As The Denver Post noted, the state’s delegate system has gone through controversy in recent months after the state’s GOP leaders canceled the party’s presidential straw poll in August. While this was meant to help ensure that delegates wouldn’t be anchored to candidates who could drop out before July, concerns have been raised about how the new convention process could allow the assignment of the delegates to occur at the party’s discretion.

Ted Cruz‘s campaign re-organizaed his Colorado ground game to account for these new conditions, and it seemed to reward him with a sweep of all 34 of the state’s delegates. As such, Trump went back to his old argument that Cruz is using bribery and theft to hijack the election:

The people of Colorado had their vote taken away from them by the phony politicians. Biggest story in politics. This will not be allowed!

How is it possible that the people of the great State of Colorado never got to vote in the Republican Primary? Great anger – totally unfair!

Trump’s statements seem to echo those of his new convention manager, Paul Manafort, who said that Cruz is using “Gestapo tactics” to subvert the peoples’ will. Trump kept up the complaining this morning, as he lamented on Fox & Friends that Cruz was virtually buying votes in order to beat him.

“[The Colorado people] weren’t given a vote. This was given by politicians. It’s a crooked deal.” –@realDonaldTrumphttps://t.co/joUPPs9R5M