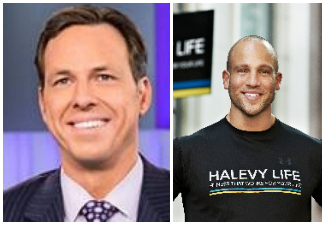 Given Jeff Halevy‘s status as not only an NBC contributor on Today but also a fitness expert, it may be for the best that his quarrel with CNN’s Jake Tapper has, so far, been limited to Twitter.

It started Monday when Tapper used Twitter to highlight a four-day-old comment by Halevy related to Kajieme Powell. “Just because your knife-wielding thief son got shot by the police doesn’t make it a racial incident,” read Halevy’s tweet, which included the hashtag #KajiemePowell.

Powell is the 25-year-old black man who was shot multiple times to death in St. Louis, Mo., by two white police officers. Powell had reportedly robbed food from a convenient store and when police tried to apprehend him, he approached them with a knife and yelled for them to shoot him. The incident occurred days after Michael Brown, another black man, was shot to death by a white police officer in nearby Ferguson.

Halevy responded, “Really, why is that Jake? What is wrong with my comment. You’re well spoken: be clear.”

Halevy rightly told Tapper he did not actually use the word “thug” in his initial tweet (He did use the term in a subsequent tweet sent to someone else. “I’d like to see what you’d do if a knife-wielding thug came at you and you had a firearm to defend yourself.”). He also said he’s “sick” of others “instantly crucifying law enforcement EVERY time races are different.”

Some back and forth occurred between the two TV personalities before Halevy offered to debate Tapper on camera.

“I suspect you’re going to be having plenty of conversations with network executives that won’t necessitate me debating you,” Tapper shot back. He followed up: “Jeff do yourself a favor and loop your manager and your NBC friends in on this conversation before proceeding.”

In subsequent tweets, Halevy accused of Tapper of being an “instigator” and said he wouldn’t want to “humiliate” Tapper on TV. Halevy then retweeted some of his supportive followers who likewise accused Tapper of stirring up racial outrage.

So, will there be a TV match between the two? We’ve requested comment from Halevy’s spokesman.

Just because your knife-wielding thief son got shot by the police doesn’t make it a racial incident. #KajiemePowell

Correction: This post originally stated that Halevy did not use the word “thug” to describe Powell. It has been updated to include that Halevy did use the term in a separate tweet on the subject to one of his followers.