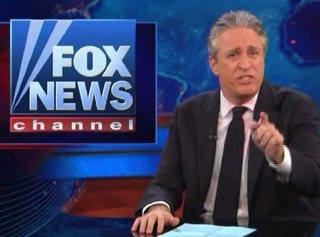 With a week off to celebrate Thanksgiving, Jon Stewart returned tonight with some orders of business to discuss– among them President Obama’s Thanksgiving address, which irritated some on Fox News for having omitted mention of God. Looking at the coverage of it, Stewart found that Fox even turned to a priest to discuss the matter, while only mentioning in passing that other Presidents had done so in the past, and that the President actually did mention God in his written address.

RELATED: President Obama Hams It Up As He Pardons The Thanksgiving Turkey

The omission, Stewart noted, was just “the one on YouTube,” which he joked had significantly fewer viewers than a cute clip of baby pandas. Conservatives appeared upset that President Obama had not mentioned God, which struck Stewart as strange for many reasons. For one, he noted that the original Thanksgiving event was not a religious occurrence, but “a bunch of pagans teaching religious zealots how to farm, so if we should thank anyone…”

He then found a clip from Fox News that showed that President Obama wasn’t the first President to omit mention of God in a video address– in fact, they had the statistics for most recent presidencies. “Who did you make look that up on a holiday weekend?” he asked in outrage, wondering how many Thanksgiving addresses had to be sifted through for that statistic. Nonetheless, Fox News mentioned the situation “on three of its shows, including at one point bringing in a priest” (frequent Fox guest Father Jonathan Morris). “The President doesn’t have to do what a priest tells him,” Stewart joked, “he’s a Muslim.”