Jon Stewart: Obama Now in the ‘F*ck It’ Stage of His Presidency 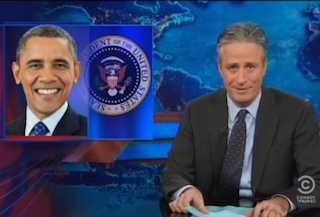 Jon Stewart taped Tuesday’s episode of The Daily Show way to early to address President Barack Obama’s State of the Union. So while we will have to wait until tomorrow night to see what angle Stewart uses to cover the address, tonight we got his preview of the speech and the inevitable media reactions.

What Stewart could comment on was the president’s efforts to use executive orders to push forward action without the help of Congress, something he did highlight in his speech tonight. “I’m intrigued,” Stewart said, “and increasingly willing to go against the Constitution and entertain the notion of a two-branch government.”

“It’s the most auto-erotic form of governance,” Stewart continued. “Who needs a part of partner when I have my hand here? Yep, President Obama is apparently now in the ‘fuck it’ stage of his presidency… And now he’s just starting to tick things off his ‘fuck it’ list”: 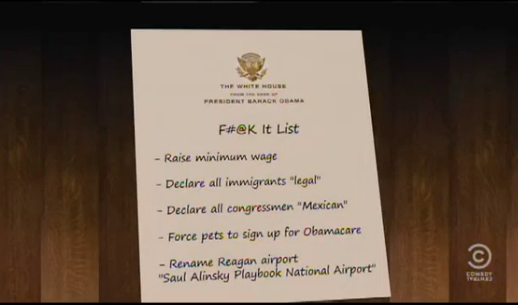 Moving on from the “executive order thing,” Stewart handed things over the Samantha Bee, who took on the whole “minimum wage” thing. She asked one “expert” who is against a minimum raise wage, “Why have one job for $15 an hour when you could have two jobs for $7.50 an hour?”

When she found another analyst who told her that raising the minimum wage can actually improve the economy, Bee responded, “Shut the fuck up.”