Judge Napolitano And Shep Smith Take On IRS E-Mail Snooping Without Warrants: ‘Stay Out Of Our Stuff!’
video

Judge Napolitano And Shep Smith Take On IRS E-Mail Snooping Without Warrants: ‘Stay Out Of Our Stuff!’ 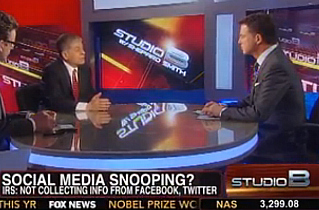 With Tax Day less than a week away, Fox News reported this afternoon on the American Civil Liberties Union obtaining IRS documents via the Freedom of Information Act that show the federal tax collection agency routinely searches Americans’ emails, possibly in violation of the Fourth Amendment’s prohibition on unreasonable search and seizures.

Reporter Jonathan Hunt noted to host Shepard Smith that the controversy over the Internal Revenue Service’s practices largely stems from the fact that the agency uses an “administrative summons” to decide to search an email without a search warrant or any form of court order.

Fox judicial analyst Judge Andrew Napolitano clarified the controversy to a “confused” Smith, explaining that the IRS intends to use this surveillance technique only for investigating criminal fraud, which makes up “a very, very, very tiny percentage of taxpayers.” However, he noted, many of the e-mails read and collected will never make it to a court case; and the ones that do would likely be questioned by a judge who wondered how the evidence was obtained without any form of court order or warrant permitting a search of private e-email exchanges.

“How is that consistent with the Fourth Amendment?” the judge hypothetically asked. “You didn’t come to me and ask for a search warrant — you just took it.”

Smith then lamented that there are “so many more instances of elements of the government or authority figures in this country getting into our stuff.”

“Stay out of our stuff,” he said to an agreeing Napolitano.

“What happens next: Anybody they suspect of cheating, they just drone them,” Smith joked to end the segment.