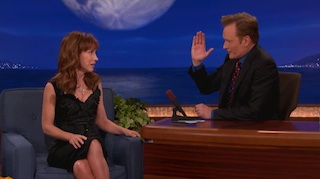 Last night on Conan, Kathy Griffin described a chance encounter she had with Michele Bachmann in an elevator. At the end of her story, she looked at the crowd and said, “President Bachmann, come on, think about it, people,” reveling in the assumed horror of the idea. If the audience is anything like us though, they’re too distracted considering the absolute misery that would be being stuck in an elevator with both Griffin and Bachmann.

The story goes like this; Griffin was in Washington DC and riding an elevator when Bachmann and a staffer got on. The staffer pulled out a camera and began taping in case there was any good footage for their website. Griffin took the chance to ask the candidate if she’d support her attempt to get Don’t Ask Don’t Tell repealed and, shockingly, Bachmann said no. So Griffin then asked if Bachmann was born a bigot or became one, to which Bachmann replied, “That’s a good question. I’ll have to get back to you.”

Griffin seemed to think this was a ridiculous response although clearly it just proves that Bachmann knows it’s wise not to get in fights with jokesters who have a huge gay following. That’s fantastic. It means, were she to get elected, we’ll never go to war with shirtless Vladimir Putin.

Really though, the best part of this clip is that you can imagine Sarah Palin watching the TV and getting furious. “What is this?! Kathy Griffin used to make fun of me! Of meeeeee! Quick, driver! Get the bus and drive me to the Bravo network!”

Watch the full Conan interview from TBS below. The Bachmann stuff comes first: