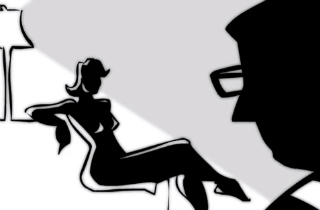 In a long-lost interview snippet with Esquire, recently unearthed by Blank on Blank, legendary broadcaster Larry King reveals a hilarious story about the time he was seduced by a random woman while DJ’ing at a local radio station.

When he was 23 years old and reporting/DJ’ing for WAHR in Miami Beach, Fl., King received a call from a listener, telling him she wants him sexually. In a 2001 audio interview with Esquire, King explained:

I’m playing these records, and the phone rings and I pick it up and say, “WAHR” and this lady’s voice—I can still hear her voice—she goes, “I want you.” [Laughter] I go, “What did you say?” “I said I want you.” And I said to myself: there’s a couple of extra pluses to being in this business. So I said—the immediate thing, I swear to god—“I get off at six!” She says, “Naw, that won’t do. I’ve got to go to work. You gotta come now.” I said, “But I’m on the air.” She says, “I’m only 12 blocks from the station. Here’s my address. If you can make it, please. I really want you.” Hangs up. I got her address. I’m the only one in station. So here’s what the audience heard: “Ah folks, I’m only sitting in tonight, so I’ve got a real treat for you. You’re going to hear the entire Harry Belafonte at Carnegie Hall album uninterrupted. I had 33 minutes, which is all the time I needed. To this day that’s still true.

After putting on the Belafonte record, King recalled rushing to the lady’s home nearly 11 blocks away. He pulled into her driveway and went inside to find a woman wearing a white negligee. As the two begin their business, King hears his own radio station playing Belafonte’s “Jamaica Farewell” in the background. But the record begins to skip:

Listen to the story below, via Blank on Blank: