Laura Ingraham Blasts The View: When I Was Called A Slut, Barbara Walters Laughed

Laura Ingraham Blasts The View: I Was Called A Slut, They Laughed It Off 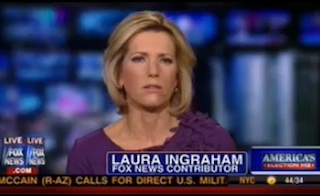 Laura Ingraham appeared on Tuesday’s Fox & Friends, and spoke out about the controversy swirling around Rush Limbaugh’s remarks to Georgetown University law student Sandra Fluke. Co-host Gretchen Carlson asked the conservative radio host whether there was a double-standard when liberals use slurs against conservatives.

Ingraham was referring to a segment from last May, where Walters and Joy Behar chuckled over Ed Schultz calling Ingraham a “right-wing slut,” as Newsbusters’ Matt Hadro reported at the time:

BARBARA WALTERS: I would like to say that Joy Behar, on this program, has called me a slut.

GOLDBERG: Joy Behar has called many people a slut on this program. Did you hear from this woman’s organization? Ever?

JOY BEHAR: Why Barbara, when I call her a slut, the truth is an ultimate defense. That’s all I have to say.

WALTERS: I beg your pardon.

“This is about free speech,” Ingraham concluded. “And the idea they’re going to target this man’s advertisers because of this — with a 20-year career — you know why they’re going after Rush? Because he’s effective.”