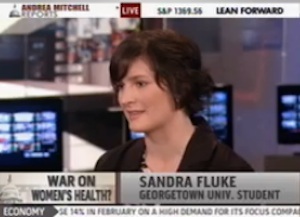 With advertisers and radio stations fleeing like deer from a forest fire, conservative radio giant Rush Limbaugh has tried, twice, to squirt out the flames by apologizing for his poor selection (forced from his mouth by “the left”) of the words “slut” and “prostitute” to describe Georgetown law student and activist Sandra Fluke., who, it can fairly be argued, has become a stand-in for millions of the daughters, sisters, wives, and young mothers of America in the minds of advertisers and their customers. Unfortunately, as Ms. Fluke pointed out, Limbaugh’s sustained 3-day assault consisted of 53 separate attacks, and removing those two words doesn’t change that total. The Jed Report‘s Jed Lewison helpfully compiled them all into a single video.

If you take out the two references that Limbaugh is referring to (he doesn’t say what words he would use in their place, and neither has Mitt Romney), you’re left with this: (fill in your own substitutes, Mad Libs-style) “essentially says that she must be paid to have sex, what does that make her? It makes her a (singular noun), right? It makes her a (singular noun). She wants to be paid to have sex. She’s having so much sex she can’t afford the contraception. She wants you and me and the taxpayers to pay her to have sex.”

There has been an effort by the right, even those who were offended by Limbaugh’s remarks, to abet him in casting this as a simple slip-up, a single lapse in judgment. This story is not about “the time Rush Limbaugh called someone a ‘slut’ and then the news cycle had to freeze in place for a week,” it is the story of how Limbaugh waded into an already-hot story that was part of a greater news narrative driven by conservative efforts to attack women’s rights, and launched a sustained 3-day attack on Sandra Fluke (and all women like her) that only (mildly) abated when he began to lose advertisers.

That is not to say that Limbaugh’s attack is necessarily better or worse than other attacks on women, be they from the left or the right, but they are not the same. My friend Kirsten Powers has taken this opportunity to expose what is an undeniable double-standard in the way the left handles misogyny in its own ranks (not all of the left, though), but Limbaugh’s apologists have used this as a way to deflect the consequences of his attacks, rather than to correct that imbalance. I think it’s fair to remove Ed Schultz from this conversation, as he is probably the only figure who has managed to deliver a convincingly abject apology (while suffering a significant consequence) in such a situation, but people like Keith Olbermann and Bill Maher have not been held to account in any meaningful way.

However, that shouldn’t be used as a means to excuse Rush Limbaugh, who has yet to apologize for these 53 attacks:

In the past, I’ve expressed skepticism of advertiser boycotts, mainly because they’re usually used to silence someone that the boycotters already don’t like, which is also why they don’t often succeed. In this case, though, it appears that the advertiser backlash against Rush Limbaugh is spurred more by a recognition that an association with this kind of broad, despicable attack is inherently damaging to an advertiser’s brand than it is to threats of a boycott. The advertiser exodus began quickly, and mostly during a weekend business dead-zone, hardly enough time for these companies to assess the cost of a boycott versus the cost of losing Limbaugh’s audience, or the benefit of advertising with Limbaugh. The sooner Rush Limbaugh realizes this, the sooner he can stanch the bleeding.