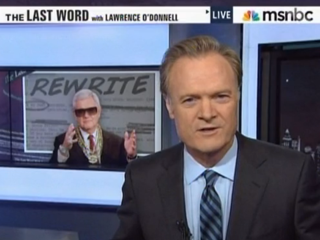 Turns out there is life after Trump for The Last Word, though that doesn’t mean Lawrence O’Donnell‘s “Rewrite” segment was any less gilded. Today’s shiny objects, literally, are unknown, as Newt Gingrich won’t reveal what they are– namely, the items that rang him up a five-digit bill at Tiffany’s. O’Donnell has taken with enthusiasm to the mystery of Gingrich’s jewelry purchases, anointing the “what did you buy?” question “the must-ask question for any reporter.”

Praising CBS’ Bob Schieffer for not backing down from the question and getting Gingrich to tell him to “go ask Tiffany’s” what he bought, O’Donnell was keen on figuring out what could be so embarrassing that Gingrich would want to hide it. “The most important question for any politician is always the question he most doesn’t want to answer,” he noted, and as such Gingrich himself gave the bill importance. O’Donnell recalled (and replayed) the famous clip of a defeated Richard Nixon telling the press in 1962, “you won’t have Nixon to kick around anymore.” Nixon, he argued, was precisely the reason “it is important we kick around politicians like Nixon as much as possible whenever we have the chance.”

O’Donnell didn’t venture a guess at what was on the bill, though encouraged viewers to send suggestions, adding that “no, Tiffany’s does not have a sex toys department.” His choice of clip as an example of a good guess, however, was telling: Stephen Colbert suggesting Gingrich buys engagement rings “in bulk.”

There are obvious reasons for many on the right to be publicly indignant with Gingrich’s bill. For a politician, he has a train wreck of a life story– three marriages, the only successful one the product of an affair. The mystery purchases could very well be linked to said moral detriment in the psyche of those that consider private failings public fair game. Yet most of these tend to be on the right, the standard “family values” conservative. Liberals, for the most part, seem to have let the Tiffany’s bill fall by the wayside, instead focusing on the fact that Republicans seem to deplore him generally and the fact that he had a box of glitter dumped on him in public. Lawrence O’Donnell is the most prominent exception, and it has much to do with his personal perceptions of morality, at least in the way they are reflected in his program (O’Donnell routinely reminds his audience that it is impossible to convey himself– or anyone– authentically over television).

Lawrence O’Donnell is, in his own strange way, a social conservative, the major difference being what does or does not constitute “family values” to O’Donnell rarely aligns with the term as commonly used. Virtue and morality are a common theme on O’Donnell’s program: helping the needy, being forthright in one’s personal life, sticking with family no matter what their immutable characteristics. O’Donnell may have an entirely different values system from, say, Rick Santorum— who values self-reliance, devout faith, and public restraint about one’s private life, among other things– but he will hold an “immoral” person to his standard of the good life as strictly as Santorum would to his.

Donald Trump was such a focal point of the Last Word‘s narrative precisely because Trump was an immoral man in O’Donnell’s eyes. He routinely revels in committing the gravest of sins in O’Donnell’s worldview: avarice. Being a socialist, O’Donnell has demonstrated time and again he believes greed is something to be reviled universally, regardless of whether anyone is individually hurt or where the money fueling the avarice comes from. For more socially libertarian commentators, Gingrich’s Tiffany’s shopping spree may be nothing but a comical footnote– no tax money, no harm, no foul. But because the fiscal gluttony is a sin in and of itself, anyone who is guilty of it, independent of its relevance to their career, is a potential target for O’Donnell’s Rewrite.

The “Rewrite” via MSNBC below: