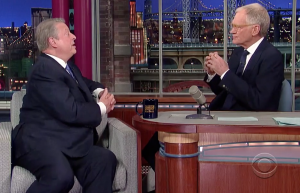 Al Gore has sparked some questions after selling Current TV to Al Jazeera — particularly given that climate change has been his cause of choice for years. On Tuesday night, David Letterman joined those who have wondered about the apparent contradiction.

Asked what his hopes and dreams were for the network, Gore said they wanted “an independent voice for news and information.” Though while they did well, “it turns out to be very tough for an independent network to compete in an age of conglomerates.”

That’s where Al Jazeera comes in. Letterman questioned why many feel as if there’s something just not right about them: “Why do we think that they may be propaganda for Muslim violence and terrorism?”

They’re “certainly not,” Gore replied. “And many years ago it put some videos on in the Arabic version that I think were misinterpreted, but the Al Jazeera English and now Al Jazeera America — really high quality stuff. They’re very widely respected, and people see for themselves.”

“And, by the way,” he said, “their climate coverage is higher quality and more extensive than any network on TV now in the U.S.”

The pair then went on to discuss Al Jazeera further, including its country of origin, Qatar — for which Gore used the descriptor “gas and oil.”

“So you’re selling this television network to a gas and oil supported emirate,” Letterman remarked. “Isn’t that one of the problems with global warming, our dependence on petroleum-producing countries?”

“So you, Al Gore,” Letterman interjected, “are doing business with this country that’s enabling your ultimate foe of climate change.”

“I think I understand what you’re getting at, Dave,” Gore replied, “but I disagree with it.”

“First of all, they have ambitious plans to develop renewables in the region. There’s a visionary plan to take solar energy and wind energy from the Middle East and North Africa to Western Europe. Again, the network that they founded has become a very widely respected news-gathering organization, including on climate issues.”

“Yeah, see if you can get Regis a show,” the host joked.