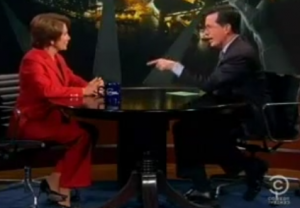 Wednesday night, House Democratic Leader Nancy Pelosi appeared as a guest on The Colbert Report after vowing, for years, to never be on the program. Host Stephen Colbert, with Ash Wednesday ashes on his forehead, didn’t waste any time addressing her promise.

“She swore up and down she would never appear on my show,” Colbert said, introducing Pelosi, “so don’t tell her this isn’t the set of The Price Is Right.”

When Pelosi came on, Colbert began by pointing out what was on everyone’s minds.

“You said you’d never come on here…do you often break your promises?”

“This is part of my Lenten promise to do good works, be kind to Republicans,” Pelosi explained. “So here I am.”

The two joked about Pelosi not having ashes yet –as the show broadcasts a little before midnight — because it’s three hours behind in California and there was still time.

Colbert then moved the discussion to Pelosi’s DISCLOSE Act, which would establish more disclosure with money in elections.

“You’ve got this sort of fetish for transparency,” Colbert told her. The two eventually got to the bottom of the Act’s purpose — to shine more light on corporations that are giving millions of dollars to fund Super PACs. Colbert brought up the example of people boycotting products that were funding Super PACs of candidates they didn’t like — for example, Brawny paper towels, owned by the Koch brothers, who are big GOP backers.

They “want to own the presidency,” Pelosi said.

“Of course you want to own the presidency,” Colbert said, “because if you keep the receipt, you can exchange it for a new president if you don’t like him.”

Watch a clip of the interview below, courtesy of Comedy Central: