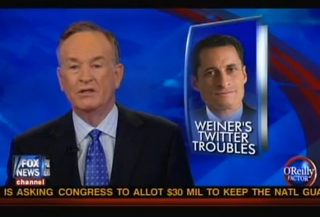 Last night, Bill O’Reilly gave the FBI “until today” to tell the American people whether or not they are in the process of investigating the alleged hacking of Rep. Anthony Weiner‘s account. Today he doubled up on his attacks on the FBI for refusing to confirm investigations, citing Wikileaks as proof that “people have compromised national security by hacking into government websites.”

While O’Reilly took time to scold Rep. Weiner for his behavior, noting he “totally botched the Twittergate story” by refusing to say whether the photo in question is of him or not, it is not the Congressman’s actions but the FBI’s that have O’Reilly worried. “They will not confirm anyhting to us; that’s wrong,” O’Reilly argued. “It’s clear from the Wikileaks controversy that people have compromised national security by hacking into government websites.” Furthermore, O’Reilly reminded his audience that the Pentagon had recently declared hacking to be a potential “act of war,” concluding in his “Talking Points Memo,” “Weiner’s case is dumb, but if he was hacked, that’s serious, so the FBI should be involved and should tell folks they’re on the case.”

O’Reilly then had Republican Rep. Cliff Stearns on the program, who had taken on the task of asking the FBI to get involved to “assure members of Congress that our Blackberrys, our computers are safe.” O’Reilly, outraged, continued to declare that knowing that is now impossible because the FBI has yet to get involved and Rep. Weiner has kept them out of it. He did return to Rep. Weiner himself, however, only to note that his claim that he did not know whether the photo was of him was “absurd,” (“It’s him in the photograph; it’s him”) and that if he was lying about being hacked, “he’s committing a crime.”