Piers Morgan: Bible And Constitution ‘Inherently Flawed,’ ‘Time For An Amendment To Bible’ 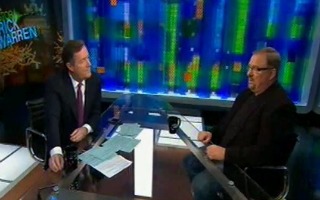 On Monday, CNN host Piers Morgan invited Saddleback Church Pastor Rick Warren on his program to discuss gay marriage and the bible. Fresh off his feud with Second Amendment rights activists following his full-throated defense of stricter gun control laws in the wake of the Newtown massacre, Morgan inspired further outrage among the religious when he told the pastor he thought it was time for an “amendment to the bible.” In Morgan’s opinion, the bible, like the American Constitution, is “inherently flawed.”

Following a polite exchange between Morgan and Warren over what the bible does and does not condone, Morgan interjected to insist that the Christian holy book needs to be modernized.

“There is still an element of the bible that is flawed,” Morgan told Warren on his program, Piers Morgan Tonight.

“I do not believe the bible is flawed,” Warren replied.

“Both the bible and the Constitution were well intentioned, but they are basically, inherently flawed. Hence, the need to amend it,” Morgan continued. “My point to you about gay rights, for example, it’s time for an amendment to the bible.”

“You should compile a new bible,” Morgan laughed.

“I willingly admit that I base my worldview on the bible, which I believe is true,” Warren said. “Opinion changes, but truth doesn’t.”

“We’re going to have to disagree on that,” Morgan said. He noted, however, that it was necessary for debates, both political and social, to remain civil in order to be constructive.