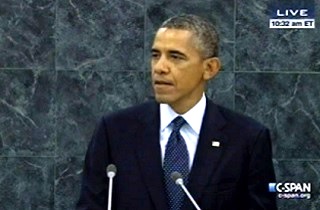 In a very Middle East-focused address before the United Nations General Assembly Tuesday morning, President Obama named Iran‘s pursuit of nuclear weapons as one of two key areas of focus, the other being the Arab/Israeli conflict. The President outlined the difficult history between the U.S. and Iran, the recent encouraging developments, and the possible path forward. “I am directing John Kerry to pursue the settlement with the Iranians,” the President said, allowing that “the roadblocks may prove to be too great, but I firmly believe that the diplomatic path must be tested.”

The President began by noting that the U.S. and Iran “have been isolated from one another since the Islamic Revolution of 1979,” and that the mistrust between the nations “has deep roots.”

“Iranians have long complained of a history of U.S. interference in their affairs, and of Americans overthrowing an Iranian government during the Cold War,” the President said, adding that Iran has declared the U.S. an enemy, taken Americans hostage, killed American troops, and “attacked our ally Israel.”

“This is something that cannot be solved overnight, the divisions run too deep,” President Obama continued. But if we can solve the issue of Iran’s nuclear program, that can serve as a major step in working toward a different relationship, one based on mutual interests, and mutual respect.”

The President reiterated the U.S. commitment to preventing Iran from developing nuclear weapons, while respecting Iran’s right to access nuclear energy, and referenced recent encouraging signs from Iranian President Hassan Rouhani. “We are against the development of nuclear weapons, and the new Iranian president has just reiterated that they will never develop a nuclear weapon,” Obama noted, adding that “these statements, made by our respective governments, should offer the basis for a meaningful agreement. We should be able to achieve a resolution that respects the rights of the Iranian people.”

“Conciliatory words will have to be matched by actions, that are verifiable,” the President continued, pointing out that “The world has seen Iran evade responsibility in the past, and has a vested interest in making sure that Iran meet its obligations in the future.”

“But, I want to be clear, we are encouraged that President Rouhani has received a mandate from the people to pursue a more moderate course,” the President said, announcing that “I am directing John Kerry to pursue the settlement with the Iranians,” in cooperation with other nations.

President Obama concluded that “I firmly believe that the diplomatic path must be tested. While the status quo will only deepen Iran’s isolation, Iran’s genuine commitment to go down a different path will be good for the region and the world. It will help the Iranian people meet their extraordinary potential in commerce and culture, in science, and education.”

Here’s the video, from C-SPAN: