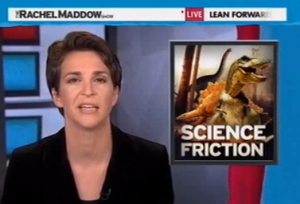 On Tuesday night, Rachel Maddow took aim at Rep. Paul Broun (R-GA), who recently made some claims about modern science that have caught people’s attention. Maddow tore into Broun’s deeming ideas such as evolution and the Big Bang Theory coming from the “pit of hell.” Less so because she disagreed, but rather because Broun is a member of the House Committee on Science.

Maddow began with a contrasting, taking a look at the winners of the Nobel Prize for Physics. Then, she turned to Broun, who made the following remarks:

“All that stuff I was taught about evolution and embryology and the Big Bang Theory, all that is lies straight from the pit of Hell. And it’s lies to try to keep me and all the folks who were taught that from understanding that they need a savior.”

“You see, there are a lot of scientific data that I’ve found out as a scientist that actually show that this is really a young Earth,” he added. “I don’t believe that the Earth’s but about 9,000 years old. I believe it was created in six days as we know them. That’s what the Bible says.”

Maddow incredulously then went through some other lawmakers involved in science-related legislation, who have made similarly provocative remarks. Including, of course, Rep. Todd Akin.

And then there’s Rep. Dana Rohrbacher, Maddow noted — who once cited possible “dinosaur flatulence” in a discussion about the Earth’s fluctuating temperatures. “Who knows,” he said.

“Who knows,” Maddow repeated. “Maybe it was dinosaur farts. We don’t know!”

Today the Nobel Prizes for physics were awarded and tomorrow the same will occur for chemistry, Maddow noted. “Meanwhile our American elected federal officials on the Republican side of the House Committee on Science will keep our nation on the cutting edge of scientific and technological breakthroughs through the magic of farting and the pits of hell.”