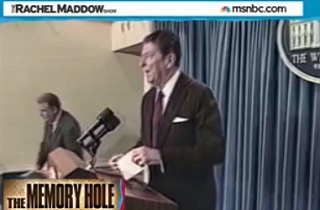 To be sure, Reagan wasn’t the only subject of Maddow’s commentary, but certainly the most consequential, and certainly only included with the likes of Jerry Falwell, Dick Cheney, and Jesse Helms in order to tarnish Reagan by association. “Republican President Ronald Reagan was opposed to sanctions against the Apartheid government, and had backup from the religious right which found itself in solidarity with South Africa’s racist government,” Maddow said, which is a true, verifiable fact, but also a smear, according to Speaker Gingrich.

“Democratic members of Congress were drawing up sanctions against South Africa’s racist Apartheid government,” Maddow continued, spouting truthaganda about Democrats, “and there was the Reverend Jerry Falwell, arm in arm with South Africa’s president.”

Maddow went on to deliver other facts, such as Reagan’s veto of even a watered-down sanctions bill that had such bipartisan support, his veto was overidden, but there was also her most dastardly attack on President Reagan, her assertion that Reagan didn’t fight the “secondary issue” of Apartheid harder because he couldn’t do that while he was also fighting against the Soviet Union. The theory goes that the Reagan administration “had one goal, which was a pretty big goal, which was to defeat the Soviet empire, and they succeeded. And in the process, they weren’t willing to be diverted to what they would have called secondary issues, when you look at the worldwide scale of the Cold War.”

Oh, wait, that was Newt Gingrich. My bad.

It appears Maddow hasn’t heard the news that opposition to Mandela in apartheid-era America was black people’s fault.