Rand Paul Battles CBS Hosts Over Necessity Of NSA Snooping: ‘They Put You In Jail If You Complain’ 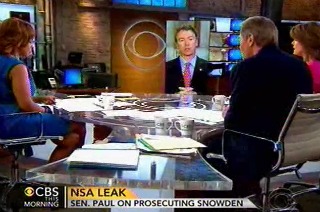 Appearing on CBS This Morning on Tuesday, Sen. Rand Paul (R-KY) engaged in a skirmish with the hosts over the necessity of the National Security Agency’s sweeping communications monitoring program. He was grilled over whether members of Congress were being hypocritical by complaining about a program which they could have or were briefed on. Asked why he was raising questions about this issue now when Congress was informed of and approved of these programs, Paul said that he has been raising questions about them for some time. “Just because Congress approved it doesn’t make it right,” he said.

Asked by Charlie Rose if he thought NSA leaker Edward Snowden was a “hero or a traitor,” Paul sidestepped the question. “I think it’s kind of a side point,” he said. “I think the real point is that the Bill of Rights are being violated, our privacy is being violated, and really no government should do this.”

“I’m reserving judgment on Mr. Snowden,” Paul continued, “but I think he felt like this was something so wrong, billions of phone records, and you have to realize, by looking at your phone records they can actually track your movements all day long.”

The conversation became contentious when Gayle King asked Paul to respond to a recent Pew Research Center poll which showed a majority of Americans were approving of the government’s monitoring of communications in order to intercept terrorist threats.

Paul said that this is beside the point. The information that the government can collect, he said, is beyond the scope of what is necessary to prevent terrorist acts. Paul said that, if the government wants, they could determine any number of things about him from his Visa card purchases.

“There’s no proof that the government is monitoring that and using that information,” countered Norah O’Donnell. “They need a warrant in order to find out where you are shopping and using your credit card.”

“Actually, you’re wrong,” Paul shot back. “There’s no proof that they’re actually doing it, but we do know that third party records, for the last 30, 40 years, have not been sufficiently protected by the Fourth Amendment.” Paul said that there is judicial precedent for this practice, but he thinks the American people “are fed up with it.”

O’Donnell said that Congress and the courts have approved the NSA’s surveillance program and that the legislature was briefed extensively on the scope of the program.

“I would say just because Congress approved it doesn’t make it right,” Paul replied. “Congress has about a 10 percent approval rating, so I think we’re doing things that the public doesn’t approve of.”

“The most ridiculous thing I hear from people of this persuasion is politicians saying, ‘oh, nobody was complaining.’ Well, you can’t complain because they put you in jail if you complain, or they don’t tell you if they’re investigating you,” he continued. “I think Americans don’t want this surveillance state.”