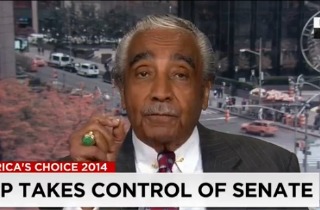 Rep. Charlie Rangel (D-NY) is doubling down on his belief that southern Republicans still believe in slavery and think the Confederates won the Civil War, implying that the Democrats’ major senatorial losses came as a result of racism.

Rangel made the initial comments last week at a rally for incumbent New York Gov. Andrew Cuomo. Wednesday afternoon on CNN, Wolf Blitzer asked the congressman if he would like to clarify his statement.

I meant that they used to call themselves ‘slave-holding states.’ They’ve been frustrated with the Emancipation Proclamation. They became Republicans, then tea party people. These are the people that are trying to frustrate people from voting, changing the voting rights that we fought so hard for. And all I’m saying is, if you want to challenge the statistics, find out where the slave-holding states are, find out where the tea party is.

“I’m just saying that it’s unfortunate America doesn’t deal with the problem of racism,” Rangel continued. “Until we acknowledge that it exists and fight hard to eradicate it, then we still have to be frustrated by people. They all come from the south and they all have these feelings about superiority and that’s true whether you’re picking cotton or you’re president of the United States.”

Blitzer noted that Rangel seemed to be “doubling down” on his earlier remarks. “You’re not walking away from them? As you know, they caused quite a stir, raising the specter of racism out there. I want to point out to you, an African-American Republican was elected, the United States Senator in South Carolina, Tim Scott.” Rangel’s response:

We’re not talking about America. We’re not talking about the advancements that we’ve made — a black president, the explosive number of African-American and others that are now in the Congress — we’re talking about a cancer that we have in the United States of America. America knows who they are. They know how they feel. And we’re talking about dealing with them. […] Racial superiority, unfortunately, is a disease that a handful of people have. And they were holding back the Republican majority in the House of Representatives. Maybe now that Republican leadership doesn’t need them, they can go along with people who want to improve the quality of life for all Americans and not those who just look like them.

Asked by Blitzer to name names, Rangel refused, instead saying “the whole world knows who they are and certainly Americans do, and certainly [House] Speaker [John] Boehner does.”