Rev. with Bland Family: This Was ‘Donald Trump of Traffic Cops’
VIDEO

Rev. with Bland Family: This Was ‘Donald Trump of Traffic Cops’ 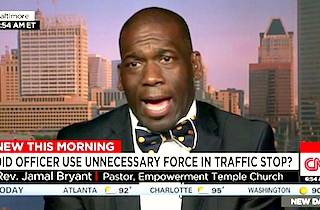 “He’s completely out of line and has gone over the cliff over failure to use a traffic signal,” Bryant said. “She knew her rights and challenged him, and he was frustrated over that…He completely went out of order in saying, and I quote, ‘I will light you up.'”

Bland was pulled over earlier this month in Waller County for a traffic violation; she died mysteriously in her cell three days later, an incident officials initially called suicide but is now being treated as a murder investigation. Dash cam footage released yesterday showed an aggressive officer Brian Encinia threatening Bland after she protested the arrest.

“He surely was not equipped to deal with somebody, particularly a black woman, who knew her rights, who was direct and insistent upon protecting them,” Bryan said.

Bryant later said that the town broke its 100-year-old custom of white undertakers refusing black bodies in the case of Sandra Bland, suggesting something was up, and called upon Attorney General Loretta Lynch to intervene.

"This is the #DonaldTrump of traffic cops" –@jamalhbryant on trooper who stopped #SandraBland. http://t.co/T0Ta7Db3CV http://t.co/fSaBTNoV6I