Russell Brand Hijacks Morning Joe, Skewers Brzezinski & Guests: ‘Is This What You All Do For A Living?’
video

Russell Brand Hijacks Morning Joe, Skewers Brzezinski & Guests: ‘Is This What You All Do For A Living?’ 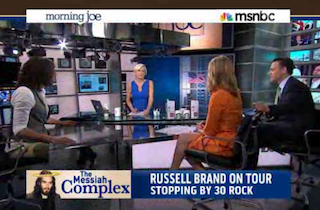 Actor and comedian Russell Brand paid a visit to the Morning Joe set, which co-host Mika Brzezinski admitted made her nervous. While the segment — intended to promote his comedy tour “Messiah Complex” — started out with compliments all around, Brand soon took over, showed them how they should be doing their jobs, and… ended by calling Brzezinski a “shaft grasper.”

After a few minutes of quips about not understanding Brand’s accent and referring to him in third person, Brand addressed Brzezinski, Brian Shactman and the BBC’s Katty Kay, telling them, “You are talking about me as if I’m not here, and as if I’m an extraterrestrial.”

As Brzezinski visibly squirmed and noted she was nervous, Brand questioned what the issue was. But soon enough, the third-person chatter started again, with Kay, for some reason, referring to Brand as “Willie.” Brand questioned who Willie was and chided them for their manners.

“Is this what you all do for a living?!” he asked, launching into his own promotion of his tour and quipping that the Morning Joe crew typically is probably better at their jobs.

At that point, he grabbed Brzezinski’s notes and pen, acting as an anchor segueing into a discussion about surveillance. “Stop saying, ‘he,'” Brand admonished again. “What’s wrong with your manners?”

At the end of the segment, Brand even offered his take on the media.

“That’s the problem about current affairs.” he said. “You forget about what’s important. You allow the agenda to be decided by superficial information. What am I saying? What am I talking about? Don’t think about what I’m wearing. These things are superficial.”

Regardless of anyone’s opinion about Brand, the whole thing was not flattering for the MoJoe panel.