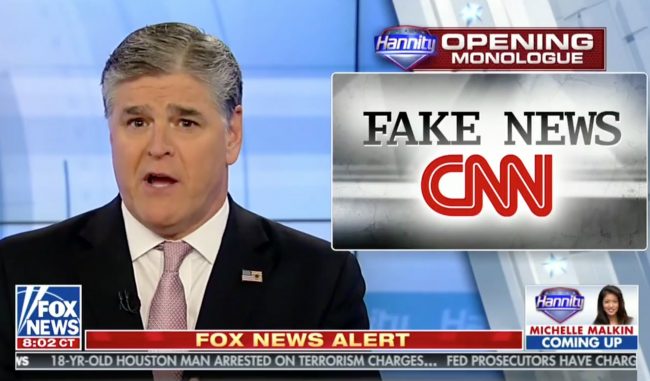 By any objective measure, Friday, December 8th was a rough day for CNN’s news staff.

Hours after publishing a bombshell report claiming members of the Trump campaign and Trump Organization — including then-candidate Donald Trump and Donald Trump Jr. — had received an email from WikiLeaks providing a decryption key and website address to hacked content, CNN issued a correction noting that it got the date of the email incorrect.

It was a big journalistic mistake that was almost immediately conflated by President Trump and his supporters as evidence of CNN’s “Fake News,” that time-honored chestnut that has redefined a phrase originally used as a synonym for propaganda to mean biased coverage or journalistic faux-pas.

There may be no better example of that conflation than Sean Hannity’s opening monologue of Monday evening’s episode of Hannity in which he covered the events of a few days earlier as he was off on Friday evening. The Fox News host pummeled CNN, network chief Jeff Zucker, and turned his attention to “stenographer Humpty Dumpty Brian Stelter,” who addressed the journalistic mistake on his show Reliable Sources over the weekend.

But the montage of CNN clips Hannity’s staff put together to establish his “fake news” thesis curiously included a clip of CNN Legal Analyst Paul Callan that was deceptively edited to completely change the meaning of what he said. Portions of both Hannity’s show and the CNN’s clip he cited have been edited together which you can watch below:

As one can clearly see, Callan’s original comment specifically claims “there’s not enough there yet to say there’s a criminal case but there’s enough information to clearly investigate carefully,” which entirely changes the meaning of what Hannity included in that clip.

To be abundantly clear, a transcript of Callan’s quote Hannity included in the segment reads:

“It’s a very interesting development because if this was an attempt to give stolen emails, hacked emails to the Trump campaign, and the Trump campaign acted on, and you would have an argument that they were then in possession of stolen property, property they knew to be stolen, right now that can be a crime under federal law it clearly can be a crime by the way under New York law…”

This was the last clip in the montage, after which Hannity picked up from Callan’s “crime” comment derisively mocking with “Ahh, crime, crime No not quite…” He then followed with “Now it didn’t take long for the rest of the sheep in the liberal press, conspiracy TV MSNBC to take CNN’s fake news and spread it to their Trump hating audience. You can’t make this stuff up…Watch this:” Hannity then played MSNBC clips designed to illustrate his point.

Callan’s full quote (the portion of video edited out by Hannity bolded.):

“It’s a very interesting development because if this was an attempt to give stolen emails, hacked emails to the Trump campaign, and the Trump campaign acted on, and you would have an argument that they were then in possession of stolen property, property they knew to be stolen, right now that can be a crime under federal law it clearly can be a crime by the way under New York law, if that’s where in fact Don Jr. looked at the email, if in fact, he did look at the email, so I think it’s an important story but we have to see how the puzzle gets put together there’s not enough there yet to say there’s a criminal case but there’s enough information to clearly investigate carefully. “

The fact that Hannity included what can only be described as a deceptively edited clip that was designed to mislead his audience, during a segment decrying false and misleading news reports from his competitors, is not only hilariously ironic, but it should be deeply embarrassing to the host, show’s producers and network executives alike.

If one were to defend Hannity’s use of this clip, one might argue that the theme of the segment was the suggestion of criminal charges, producers can’t include everything in 60 minutes of live TV and they aim to get the most pertinent information and clip to illustrate their points. But that would be an overly generous defense.
Now, unlike Hannity, we are not going to cry “FAKE NEWS” at this very obvious example of misleading reporting, because that phrase should remain reserved for, to use an example, falsified news stories crafted by Russian propagandists to deliberately deceive readers and push a narrative (though it must be admitted, Hannity’s deceptive editing is not far off…)

What’s more, Hannity doesn’t define itself as a news program. Instead, Fox News labels this a news analysis and opinion program, which conveniently allows circumvention of the very journalistic standards of Fox News competitors that it relishes ridiculing.

One might even say that this example is proof that Fox News has a “news” problem.