‘Sodomy: We All Have To Pay!’ Coulter Debate On ‘Nannying’ Devolves Into Battle Over Gay Bathhouses

'Sodomy: We All Have To Pay!' Coulter Debate Devolves Into Battle Over Gay Bathhouses
Twitter share button 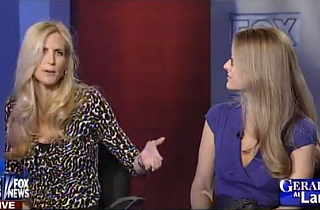 This might be perhaps the greatest segment of Geraldo at Large ever known to man. During what was supposed to be a debate about NYC Mayor Michael Bloomberg‘s various “public health” laws — indoor smoking bans, hidden cigarette displays by mandate, bans on large sugary beverages, etc. — Ann Coulter attempted to flip the “liberal nannying” logic upside-down by bringing up illegitimacy, sodomy, AIDS, and gay bathhouses.

Suffice it to say the segment went off the rails. And did so quickly.

Anti-obesity advocate (and big Bloomberg fan) MeMe Roth started off praising the mayor’s various efforts by noting that he is a “student of behavioral psychology” who understands that “increasing the inconvenience just a little bit” will lead to better choices by the consumer.

Coulter was not having any of it. She tore into Bloomberg by suggesting we just be done with it already and “have a death penalty for smokers,” before changing the subject to the negative behaviors that liberals are unwilling to stigmatize, such as illegitimate birth.

Geraldo Rivera‘s efforts to corral the segment away from unwed teen pregnancy were for naught. When Roth made the claim that bans on various unhealthy activities are warranted because “we pick up the tab” for other’s bad habits, Coulter countered that “I think you’re going to have to do something about the gay bathhouses.”

“AIDS is very expensive, and if I’m paying for it, how about discouraging that behavior?” she explained.

Later, while clarifying that she doesn’t actually want to ban homosexual activity, she told Roth, “If you’re argument is ‘Smoking: we all have to pay,’ then why not ‘Sodomy: we all have to pay.'” She told Roth that a consistent position on “nannying” would require her to be “anti-bathhouses” in addition to anti-smoking.

“Can we get off sodomy for a moment?” Rivera asked at one point, seemingly realizing this segment will be fodder for websites like Mediaite.

“The behaviors that liberals approve of, they will not stigmatize,” Coulter once again explained. “Illegitimacy, they are very upset Bloomberg is stigmatizing. Sodomy… they won’t stigmatize. But smoking… if we’re looking at it for health costs, there are plenty of other things.”

The segment then, somehow, shifted towards a conversation on “stop-and-frisk,” with Coulter suggesting we use drones to execute the controversial police policy.

Watch the gloriousness below, via Fox News: