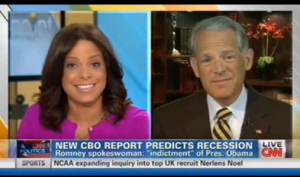 On Thursday, Starting Point host Soledad O’Brien invited Rep. Steve Israel to the show to discuss “Hurricane” Joe Biden‘s potential threat to the RNC convention in Tampa, as well as to who is at fault for the CBO’s warning of a looming fiscal cliff.

Israel said Biden was heading to the convention as a “relentless fighter for the middle class,” offering a contrast to Republican policies.

O’Brien rather hilariously responded by saying, “So the answer is you’re sending him to — he’s going to Tampa so that he can be on camera at the same time the Republican convention is on TV, essentially, is the answer to that question.”

Later, after responding to RNC chair Reince Priebus‘ comments about donning metaphorical “brass knuckles” to fight back against Democrats, Israel told O’Brien that it was “reported yesterday they may send us back into a recession by not passing a budget that extends tax cuts for millionaires because they want to hold the middle class hostage to get those tax cuts for millionaires. ”

“Well, as you well know, the Congressional Office Budget report does not say exactly what you just said,” O’Brien responded. “They did say that the fiscal cliff is looming, and I do think that people would say there is plenty of blame to go around.”

“Isn’t the answer that, actually, everyone is to blame on this?” she asked her guest. “I mean, everybody voted for that. A large number, right?”

“No, no, Soledad, no,” Israel replied. “With all the respect in the world. On three separate occasions, we offered a compromise to the Republicans that John Boehner, the Republican Speaker of the House, agreed to. It was big. It was bold. It was balanced. It reduced debt. It cut spending. But it also said that, if you’re a millionaire, you’re going to do a little bit more in order to protect Medicare and in order to protect the middle class. On each occasion, John Boehner went back to his Tea Party Caucus and his Tea Party Caucus rejected compromise. We are ready, willing, and able to go back to that compromise. We need a Republican party that is willing to compromise with us.”

“But the President signed off on the deal,” said O’Brien, turning to panelist Will Cain for verification. “I’m not mistaken about that. Am I wrong about this? Didn’t the President sign off on this deal? There are many fingers on this problem, is how I read this.”

Have a look at their debate, via CNN: