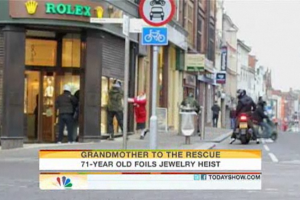 Yes, you read that headline right. No, it’s not the plot to the stupidest movie ever made (although, if it were, it would probably co-star Kevin James, feature a hilarious scene where the old lady raps, and have about 1,000 Viagra jokes). No, this is a real thing that actually happened in Northampton, England, where 71-year-old Ann Timson has now been dubbed “Supergran” after clubbing a couple of thieves with her handbag as they tried to escape a jewelry store robbery. To make it even better, the whole incident was caught on tape which is great because it will save Hollywood money. Money they can then use for more Viagra jokes.

It all started when Timson saw a group of men wielding hammers in front of a store and thought someone was getting beaten up. She rushed over to stop them only to realize it was a robbery in progress.

“‘I was not going to stand by and watch someone take a beating so I intervened,’ she said, according to The Sun. ‘As I got closer, I saw it was a robbery and then I was even more angry that they felt they could get away with that in broad daylight.’
She was further enraged when one member of the gang drove off on a scooter, nearly hitting a woman and baby.
‘I clobbered him with my shopping, but he got away,’ Timson added. ‘The rest were still trying to smash and grab the jewelry.
‘I just kept swinging my bag, then they tried to escape. I landed several blows against one lad on the back of a bike and brought him to the ground.'”

Man, that’s so much more effective than the old lady in A Fish Called Wanda who witnesses the jewel heist and then just keeps having her dogs get murdered.

…Ok, I’m sorry. That was a complete tangent and entirely unrelated to the story. That fake Kevin James movie I made up just sounded so real that I feel like I’ve already seen it so I was trying to wipe my memory. Apologies.

Anyway, the video is absolutely incredible. Check it out as well as the Today Show report on the story below: