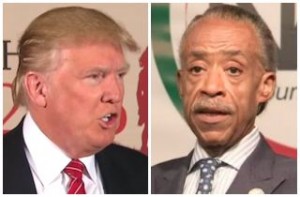 National Review reports that Sharpton and Trump first became partners in the 1980’s when Trump wanted to sell Atlantic City’s casinos as a tourist destination. He reached out to Sharpton to help bring famed boxing announcer Don King into his corner, and the pair became regular boxing buddies and occasional business associates.

Trump went on to donate “anywhere between $20,000 and $150,000” to Sharpton’s charity the National Youth Movement. News reports during Sharpton’s 2004 presidential run listed Trump as one of Sharpton’s “mentors.”

As late as 2004, Trump was accused of letting Sharpton’s alleged mistress into a luxury apartment in Trump Place despite lacking the necessary credit and income. “Donald didn’t own this building,” says one of National Review‘s sources says. “But Sharpton asked if he could get his ‘friend,’ who didn’t have credit standards, into the building. Donald accommodated.”

Trump actually addressed their relationship during a Fox News hit last December. “I know [Sharpton] very well, and I’ve always gotten along with him, to be honest with you. There are those who say [Sharpton] likes Trump a lot. . . . Al’s a con man. He knows it. I know it. Don King knows it, his friend, who I go to with fights with — with Al. And they all know it.”