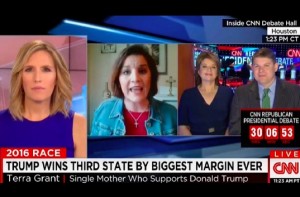 One of the (many) criticisms being leveled at Republican presidential frontrunner Donald Trump has been that he doesn’t provide enough specific information about his policy proposals, or in some cases, any at all. That doesn’t seem to have stopped him from bulldozing his wonkier competition, and on CNN Wednesday afternoon, one of his beloved supporters explained why that is.

On CNN Newsroom Wednesday, host Poppy Harlow threw Trump supporter Terra Grant into the mix with CNN political analysts Ben Ferguson and Ana Navarro, and asked her to explain why Trump doesn’t get more specific about things like fighting ISIS, health care, and his immigration plan. Grant took a page from her candidate’s book, and pasted it onto all of his policies:

While Grant is probably on to a hot new slogan – “Make America a Great Country Again As a Nation” – she has taken the normal partisan resistance to facts and turned it into an allergy. As Ferguson alluded to, laying out a health care plan isn’t going to tip off the diseases, but logic isn’t anywhere in the Trump equation.

To the extent that there is a beauty to Trump’s support, this is it, the ability to turn every possible scenario into a win for the candidate. To the extent that you want to look down on Terra Grant, though, Trump has managed the exact same trick with pretty much the entire news media.