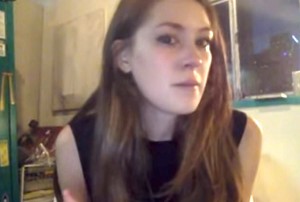 A young woman named Chelsea is burning up the Youtubes with her tearful tale of phone-banking for Senator Bernie Sanders (I-VT) and running into scores of “really sick people” who are voting for Republican frontrunner Donald Trump. The four-minute clip was apparently posted on Facebook, but has racked up hundreds of thousands of views on YouTube.

In the clip, “Chelsea” addresses the camera directly, and kind of goes to pieces immediately because, while phone-banking the deep South states for Super Tuesday, she kept running into Trump supporters who actually refer to human beings as animals:

Hi, Facebook. It’s Chelsea. So today I hosted a phone bank for Bernie Sanders, and, uh, we were calling the states — like, a lot of Deep South states — for Super Tuesday. And I’ve never gotten emotional over politics before, and I’m still learning, and I think it’s really important. But I think it’s really important that everyone knows that, um, the people that we called, many of them, unsurprisingly, were voting for Trump. Umm, and I just want you to know that the people that are voting for him are really sick people that refer to human beings as animals, and it actually made me sick. It was really disheartening.

And I don’t think anyone that’s human that has feelings and sense can sit through hours of talking to people that believe that, um, just because you weren’t born in the United States or even if you were and you’re not white – which, I don’t know what qualifies you as “white” anymore – it makes you not a human being. There were a lot of comments about just building walls and getting rid of the Mexicans and – and, um, hearing… hearing that for hours was so horrible. And it was really, really nice, uh, when you would get people that answered that were for Bernie, or even Hillary.  There were very few Republicans and conservatives that would answer the phone and be kind, that wouldn’t have something horrible  to say.

So , if you’re not politically involved, that’s fine. But I think that you  should know what’s going on. People are actually saying disgusting things like this, and it’s real, and I couldn’t type it out because it was so, so horrible. Um, and that’s that. It was really interesting. It’s still a really a magnificent thing to do to be involved, but, um, it was really hard, and it was not at all like calling the other states, um, and calling Nevada. Uh, and , you know, these are people that think that they won the Civil War. Uh, it’s like talking to less than a brick wall. Um, I don’t even know how to describe it. So this is just coming from someone who did some phone banking on Saturday. Have a good night.

As much as I hate to do it, I’m going to have to go ahead and agree with Rush Limbaugh that this thing rings more falsely than a counterfeit iPhone. It’s not so much that you wouldn’t expect to hear things like this from Trump voters, but that you wouldn’t expect any real human to react this way. Nothing Chelsea says is any worse than things Trump has said himself on television. And as Rush pointed out, you also wouldn’t expect someone phone-banking for a Democratic candidate to constantly end up on the phone with Trump supporters. I’ve done phone-banking and canvassing, and Limbaugh is right, you work from rolls of your own party’s voters.

If that’s the case, then I applaud Chelsea’s crying chops, because they were really convincing, but the material was weak. If not, then here’s hoping the Sanders campaign finds a safer space for Chelsea to phone-bank.