Trump to O’Reilly: The 14th Amendment Won’t Hold Up In Court 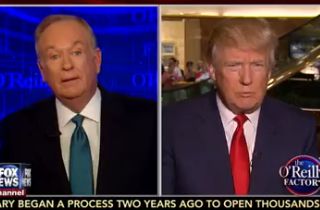 During Bill O’Reilly’s interview of Donald Trump tonight he put particular focus on Trump’s newest idea for immigration by eliminating birthright citizenship. O’Reilly said that even though he was intrigued by his call to curb illegal immigration, he was not so sure that Trump’s ideas for mass deportations can happen under the 14th Amendment.

Trump responded that O’Reilly’s concerns by saying he was wrong about how the Constitution applies to anchor babies. “Many lawyers are saying that’s not the way it is in terms of this,” Trump said. “They are saying it is not going to hold up in court. It will have to be tested but they say it will not hold up in court.”

O’Reilly agreed that the country needed stronger laws and borders, but said that the federal courts would never allow a mass deportation for those who are entitled due process by their American citizenship. “Do you envision federal police kicking in the doors around the country dragging families out and putting them on a bus,” O’Reilly asked.

Trump retorted that he doesn’t think they have American citizenship, and that there are many lawyers that agree with him. When asked about whether he would pursue a constitutional amendment, Trump dismissed the idea, saying that it would take too long and he would prefer somehow testing to see whether anchor babies were truly American citizens.