Trump Wishes America Had Invaded Mexico Instead of Iraq
VIDEO

Trump Wishes America Had Invaded Mexico Instead of Iraq 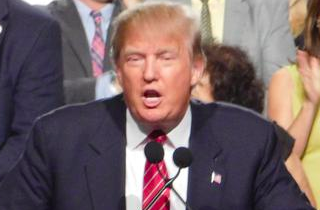 As Donald Trump continues to both suffer economically and benefit politically following his controversial remarks about Mexican “rapists,” the candidate has attempted to shift the focus of his ire from the Mexican people to the Mexican government. That strategy appeared to reach its apex over the weekend when Trump reportedly said the U.S. should have invaded Mexico instead of Iraq.

According to an anonymous attendee of a speech Trump gave to the Hollywood conservative group Friends of Abe on Friday night, the candidate reiterated his stance on the Iraq War, arguing that the removal of Saddam Hussein eliminated an important check on Iran.

“Instead, we should have invaded Mexico,” Trump then added to what was reportedly “rousing applause” from the crowd in attendance, which included conservative celebrities like Lou Ferrigno, Paul Sorvino and Trump’s new friend Ann Coulter.

This shift in Trump’s rhetoric to focus on the Mexican government, which he claims is intentionally “sending” its worst criminals into the United States, was also seen in remarks made by his longtime business advisor Michael Cohen on CNN’s Reliable Sources.

“What Donald Trump is angry about is there was a statement that was made regarding Mexico, and every liberal media outlet jumped on it and they switched it from Mexico meaning the government to the Mexican people,” Cohen said on Sunday. “And that was absolutely unfair. It was dishonest.”

What host Brian Stelter failed to ask in a follow-up was: “So, you’re saying Trump was calling the Mexican government ‘rapists?'”