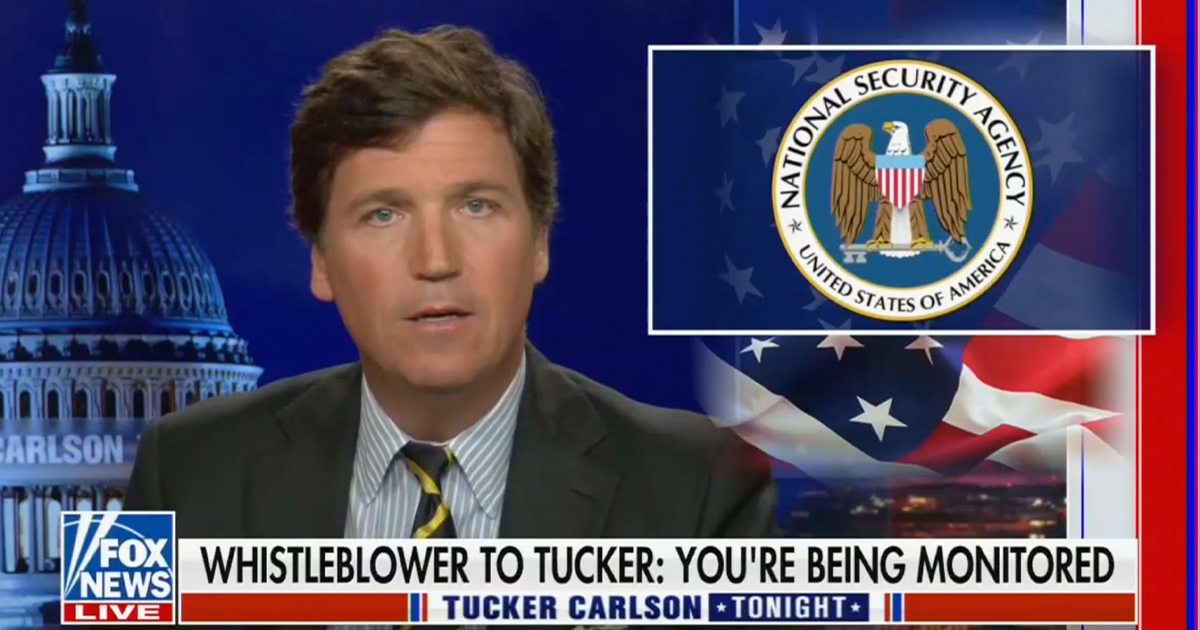 Tucker Carlson dropped a bombshell Monday night: The NSA, he said, was monitoring his private communications in an effort to get his show off the air. The claim has all the makings of a massive scandal. A presidential administration spying on a free press because one host was deemed the opposition.

Curiously, this bombshell development has been entirely ignored by everyone else on Fox News. Why is that?

Carlson told his viewers that a “whistleblower” from the U.S. government reached out to his show “to warn us that the NSA, the National Security Agency, is monitoring our electronic communications — and is planning to leak them — in an attempt to take this show off the air.”

The allegation that a government agency is spying on a media figure is a huge deal. The claim that the NSA is trying to take Tucker Carlson Tonight “off the air,” as Carlson declared, would be one of the biggest scandals of an administration cracking down on a free press in recent memory.

And yet, since Tucker Carlson made this claim, it has been entirely ignored by everyone else on Fox News, both opinion and news division.

The news division’s lack of curiosity about this titanic injustice being waged against their own network was neatly expressed by HotAir’s Allahpundit, as well as other media reporters.

it would be a mega-scandal if the government targeted an ideological critic by leaking his private communications to try to ruin him. and tucker just dropped it right in fox’s lap.

does the news division have any curiosity about this? https://t.co/NEo8ed8GR4

A search of transcript database TVEyes reveals that Carlson’s name has not been mentioned on Fox News since his show aired (other than its early morning rerun.) Neither opinion-based morning show Fox & Friends or any daytime news shows have deemed an allegation that the federal government is spying on their colleague to be newsworthy. Huh?

Mediaite reached out to Fox News for an explanation and will update this post if and when they reply.

Fox News is comprised of two kinds of shows: opinion and news. And Carlson is the top-rated opinion program, not just on Fox News, but in all of cable news. But what Carlson expressed on air was not just commentary; it was presented as a factual allegation. Just being labeled an “opinion show” does not give one the freedom to lie with impunity

In fairness to the Fox News news division, there is other news to cover, namely the tragedy in Surfside, Florida, and ongoing political debates that form the bulk of their coverage, such as the recent spike in crime and border control issues. But Fox’s silence on Carlson’s allegations is noteworthy.

And it actually paints Fox News in a more favorable light than Carlson, whose allegations appear to be have been met by his own colleagues with a great deal of skepticism.

White House Press Secretary Jen Psaki was asked about Carlson’s claim on Air Force One, and she dismissed it, noting that the NSA “is an entity that focuses on foreign threats and individuals who are attempting to do us harm on foreign soil,” before pointing reporters to the “intelligence community.”

There has also been broad and bipartisan skepticism expressed about his claim as well.

But the lack of interest in Carlson’s bombshell claim from his fellow colleagues at Fox News speaks volumes about the Fox host’s standing. He’s a very successful entertainer because of the stories he tells. But his stories might not always be worth believing.