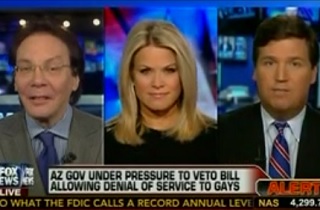 With the political world waiting on tenterhooks for Governor Jan Brewer (R-AZ) to decide whether she’ll veto Arizona’s SB1062, which prevents the government from compelling individuals to act in a way that would “substantially burden a person’s exercise of religion,” Fox News host and Daily Caller publisher Tucker Carlson bravely came to the defense of bigots, and called out the “fascism” of affording equal protection to gay people with regard to public accommodations like the sale of wedding cakes.

Media Matters flagged an exchange, on Fox News’ America’s Newsroom, in which Carlson takes the half-baked conservative attempt to pervert the word “tolerance” to include bigotry, and kicks it up a Godwinian notch. “If I don’t want to bake you a cake for your gay wedding, that’s okay too, or should be,” Carlson says. “That’s called tolerance. But when you try and force me to bake a cake for your gay wedding and threaten me with prison if I don’t, that’s called fascism.”

He goes on to call it “insane,” and “fascism” one more time, but the real stars of this clip are Alan Colmes and, yes, Martha MacCallum. You expect Colmes to make all the right, obvious-to-any-5th-grader points, like how the broad language of the law would allow other types of discrimination (contrary to Carlson’s belief, opposition to racial intermarriage also goes back a long way, and still exists), or that it could extend to situations more serious than a large pastry, like refusing medical treatment.

But it was MacCallum who really shined by stepping in, as the anchor, and authoritatively keeping Carlson on track when he strayed into a side-point about whether opposing gay marriage makes you a klansman. “That is the argument,” she said. “You’re either open for business, or not open for business. You can’t choose based on different criteria, any more than a Muslim bakery can say you can’t come in here without your head covered to shop here. You can’t do that.”

This was followed by Carlson apparently supporting the right of forced head-coverings in bakeries, and then arguing that bakers should be able to ban conduct that there are already laws against. “You can’t come into my bakery naked. You can’t come in here and use vulgar language,” he said.

The fact is, you’re free to be a bigot in America, but in certain situations, you’re not free to act on that bigotry. To extend Carlson’s absurd logic, if that same baker’s religion prevented him from serving Jews, it would be “fascism” to compel him to do so. You could say that takes the cake, at least until Tucker Carlson gets his way.

Here’s the clip, from America’s Newsroom: