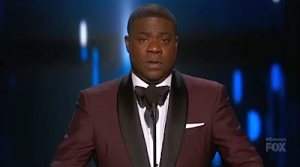 Recovering actor Tracy Morgan gave a stirring speech at the Emmy Awards on Sunday night when he surprised the audience as the final presenter of the evening.

Like the few number of public appearances the Saturday Night Live and 30 Rock star has made since last year’s nearly-fatal car accident, most of what Morgan had to say was serious. However, the comedian was able to squeeze in a few laughs — much to the delight of his friends and former colleagues.

According to Variety, however, not everyone thought Morgan’s remarks regarding the accident were funny. David Jay Glassman, attorney for Walmart truck driver Kevin Roper, who may have caused the accident that led to Morgan’s hospitalization and the death of fellow comedian James McNair, issued a statement condemning the actor’s comments.

“This is exactly what happens when a prosecutor and a judge allow parties to dictate what’s important and control the proceedings,” Glassman said. “Clearly the last thing on the mind of the Middlesex County Prosecutor’s Office and the New Jersey Federal District Court Judge who permitted Morgan’s civil case to supersede the pending criminal proceedings, was Mr. Roper’s constitutional rights, including the right to have his guilt or innocence decided in a courtroom, as opposed to by the national media or by way of comments made by Mr. Morgan during the nationally televised 67th Annual Emmy Awards.”

Glassman goes on to argue that in Sunday’s speech, “Mr. Morgan has confirmed that his monetary goals have been realized and his personal as well as professional recovery is well underway. Unfortunately, the same cannot be said about my client, Kevin Roper, who awaits indictment, while his constitutional rights were discarded in favor of an unprecedented rush to judgment and material for comic relief.”

Morgan and Walmart settled in civil court back in May. The criminal case against Roper, however, is still in progress. The driver has pleaded not guilty to the charges levied against him.