The new presidential preference poll from Fox News, which shows former Vice President Joe Biden beating President Donald Trump by a comfortable margin nationally and a wider margin in counties that were close in 2016, caused a stir heading into the weekend.

So much so that it resulted in quite the on-air moment on Friday when Trump campaign spox Kayleigh McEnany essentially called the network’s poll false – twice – when speaking with Fox anchor Martha MacCallum for The Story on Friday night.

McEnany then went through the usual list talking points about the great “leadership” of Trump and “ineptitude” of Biden during the coronavirus crisis.

After McEnany’s pitch was complete both MacCallum and her other guest, Fox contributor Jessica Tarlov, began to push back, talking over each other for a moment in their haste to address McEnany saying she doesn’t believe Fox’s poll.

“If we’re not going to believe polls, then only 20% of Americans approve of the job that President Trump is doing handling coronavirus,” said Tarlov, as McEnany began to talk over her.

“No I believe polls, I just believe our polls,” said McEnany, implying even more strongly that the Fox poll was somehow untrustworthy or deliberately biased against Trump.

“Alright, you know what? We put the numbers out there for everybody to take a look at, and at home, they can decide if they agree, if that poll, you know, rings true for them or not,” said MacCallum, holding her apparent irritation back. “You know the ultimate poll of course happens in November and we’ll see how that goes.”

McEnany may doubt the results, but it wasn’t just Martha MacCallum and Jessica Tarlov who who disagreed. Even competitor and frequent target of criticism from Fox personalities Jim Acosta of CNN was on board for this Fox poll. 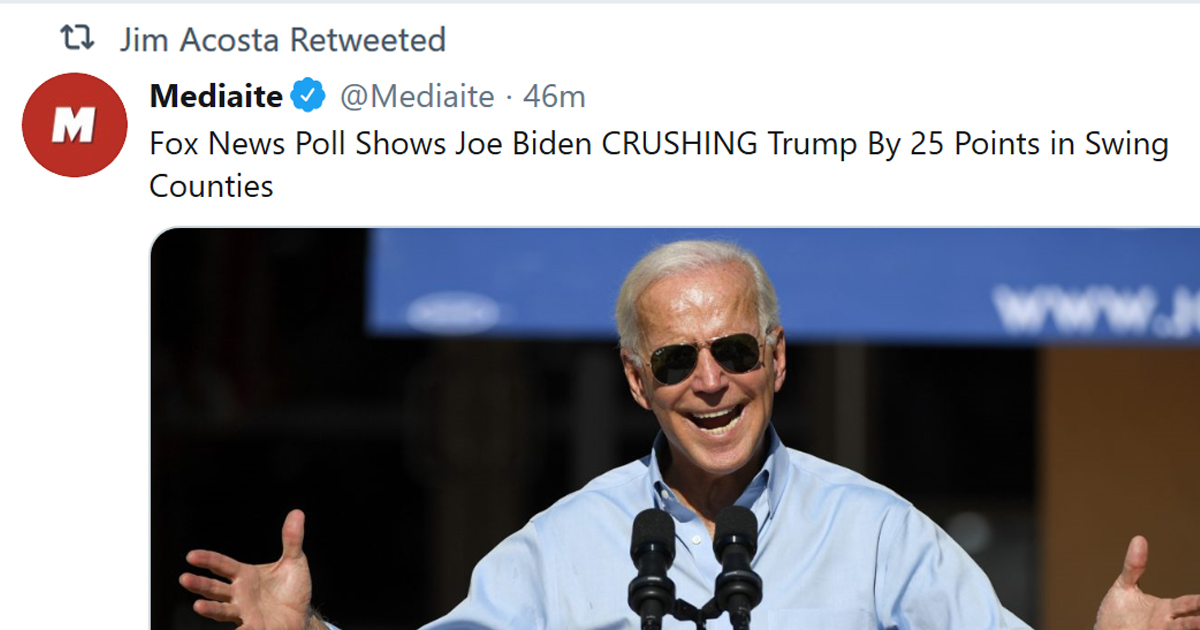 CNN’s John Harwood shared it, too.

With McEnany coming just shy of calling it fake news, and Trump’s favorite press nemeses tweeting it, how long before he takes a shot himself?