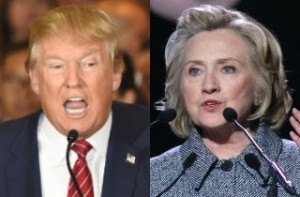 Donald Trump soundly beat 16 other candidates and spent relatively little money in doing so on his way to the Republican nomination. Free media — estimated to be well into the billions — by those who couldn’t get enough of the Trump (ratings) bump were just too good to pass up.

Trump rallies, Trump interviews, soundbites of Trump from interviews on other networks, cable news and Sunday morning segment debates over what Trump said… from June of 2015 until now, that’s mostly what cable news has become outside of big breaking news (such as terror attacks). And even when Hillary Clinton did or does get airtime, most of the questions were/are about… Donald Trump.

But the last three weeks has been particularly painful for Team Trump — the idiotic comments about a Mexican (born in Indiana) judge, the poor response to the Orlando shootings, the firing of his campaign manager, the revelation that he only has a little over a million dollars in the campaign coffers… all appeared to doom the candidate before summer even officially began. But then some polls came out this week in battleground states that — in the words of C&C Music Factory — just make you go hmmm…

Per Quinnipiac, Trump tied with Hillary in Ohio (40-40) and down just one point in Pennsylvania (the last Republican to win the Keystone State was George Bush… in 1988). Overall in the RCP average, Trump is only down 5.8 points nationally. The “only” part qualifying because one would think a candidate with that kind of horrific stretch and owning unfavorables ranging from somewhat to positively underwater with nearly every demographic group out there would be down 10, 15, even 20 points right now both in places like Ohio and Pennsylvania and nationally. But the bump for Mrs. Clinton following her clinching the Democratic nomination — combined with Trump’s myriad of recent, sticky mistakes — is unspectacular at best and disturbing (depending on how you vote) at worst.

On the media front, part of Trump’s success has been his ability to do multiple interviews across major outlets and particularly cable news on a daily basis. But what’s always noticeable is the 70-year-old seemingly doing it all by himself without major, big-name surrogates there to have his back since he can’t be everywhere at once to defend himself (and there’s always ample material to defend). Chris Christie — one of his few opponents willing to endorse him — is practicably invisible despite being one of the better messengers on the Republican side. Ben Carson pops up here and there — as he did on Morning Joe this morning — but it’s not even close to often enough. Every other major candidate Trump has faced — from Jeb Bush to Marco Rubio to John Kasich to Ted Cruz — have mostly stayed on the sidelines while refusing to endorse the nominee, while other Republicans outright slam him.

As for conservative media, there’s not much going for Trump on that front, either: National Review leads the #NeverTrump movement. RedState isn’t far behind. Newsbusters — another tax-free entity which shouldn’t be — was anti-Trump throughout the primaries. Fox News opinion folks — never ones to prescribe to groupthink — are a mixed bag when it comes to the GOP nominee — some are in his camp, some decidedly not. Only — it seems — Breitbart and Drudge continue to march to Donald’s drumbeat in lockstep at this point.

Add it all up, and can you recall any national candidate having so many people and entities from a political and media perspective… so overtly and patently against him every hour, every minute on the air and in print? And yet, despite this huge undercurrent, he’s still somehow within striking distance of a historic candidate with tens of millions of dollars more in the bank and a whole army of surrogates to spread her message.

That said, Trump needs to have many more proxies — official ones of the campaign — blanketing the airwaves as election day comes closer. Enter Kevin Kellems –who according to the New York Times was hired last week, “to provide order and breadth to the ecosystem of supporters.” Order. Breadth. Those about the last two words that come to mind when thinking of the past 12 months of the Trump campaign. Kellems is a pro, however, having advised everyone from a communications perspective from Newt Gingrich to Dick Cheney to the late Fred Thompson while in the Senate.

Trump trails in the polls. He trails on the money trail. And he definitely trails in the messaging department while his opponent has a sitting president, vice president and soundbite-attracting senators like Elizabeth Warren and Cory Booker on her side… along with a repulsed-by-Trump media there to attack her opponent relentlessly.

Kevin Kellems has a tough job ahead of him. Trump’s message doesn’t have a blueprint to turn to, no precedent to match. Big names willing to publicly support him are fleeting.

Trump cruised to the nomination on his own, partly thanks to a media willing to give him airtime anytime he wished.

But the primary isn’t the general.

Organization and willing lieutenants are needed to cover the media map.