For ABC’s Nightline, Quake Serves As Reminder Of How To Feed News-Hungry, Dedicated Viewers 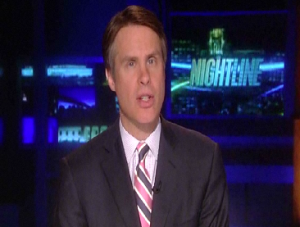 At ABC’s Nightline, the earthquake in Japan–and the resulting threat of tsunami in Hawaii and the U.S. West Coast–served as a vivid reminder: you’ve got a news-hungry, dedicated audience. They expect to be fed. Sometimes they’ll be happy with cake and ice cream, but when they want steak, you better put some beef on the plate.

The massive quake hit at 2:46 p.m. Japan time, which was 12:46 a.m. ET in the U.S. Nightline, the resurgent late night news program that finished the February sweeps with some of its best ratings ever, was over, but set for re-broadcast on the West Coast, where it was still just 9:46 p.m.

In Los Angeles, Fox-owned KTTV-TV, seeing the initial reports from Japan, decided to throw out the late news rundown and swarm the story, the hourlong ten o’clock late newscast ultimately stretching until 2 a.m. PT. “To me it was just a huge story,” KTTV news director Jose Rios told Michael Schneider at Franklin Avenue. “It was a big quake for one, and for us in earthquake country, that resonates broadly for us,” Rios said. “And while people think that the cable channels will be covering, the fact is, not everyone has cable. We thought it was a public service that everybody would be interested in.”

It’s exactly the kind of big, important story that Nightline viewers have come to count on their show for smart, live coverage. Had the quake happened at 9:45 p.m. ET, it’s beyond question the show would’ve been all over the story. But viewers on the West Coast didn’t get quake coverage Thursday night. As Broadcasting and Cable‘s Ben Grossman writes, the effect for Nightline viewers (like himself) was jarring:

While the show often has segments that are much breezier on any given night, it has shown again recently with huge events domestically and abroad the ability to dive into important topics when they break.
But when I flipped to KABC here in Los Angeles, I saw a taped piece about some Justin Bieber-looking kid from You Tube. When I flipped back a bit later to see if they had broken in, there was a taped interview with comedian Kathy Griffin.

At ABC News, a spokesman tells Mediaite there are no excuses. It was, simply, a bad call. “We should have gone live.”

And tonight, of course, Nightline will be a key part of the network’s intensive coverage plans for the quake and the tsunami, with ABC’s Christiane Amanpour and David Muir already en route to Japan, and a special hour of 20/20 set to complement a Nightline that will be devoted–as you’d expect–to the big story of the day.