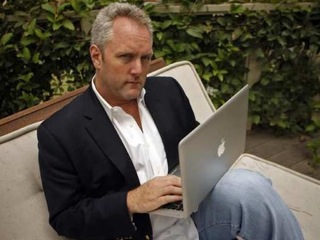 Regular visitors to the Huffington Post have quite a surprise waiting for them on the homepage: the debut of the site’s newest contributor, right-wing web proprietor Andrew Breitbart. Yes, that Andrew Breitbart. While Breitbart had been involved in the creation of the site, he had yet to procure a byline. But now he has taken his battle to “fight back against the left and its accomplices in the mainstream media” straight to their home turf– and if commenters are any indication, he is receiving a rather warm welcome.

The decision to publish Breitbart is particularly interesting in itself, but the content deserves a look, too. Breitbart certainly didn’t self-censor for the venue. When was the last time a column on the site vowed to “resist [the left’s] longstanding propaganda attack on the Tea Party as racist, homophobic, Nazi, nativist, and whatever fill-in-the-blank negative stereotype they can muster to marginalize millions of Americans”? Breitbart may not be a stranger to the site (he is named as a “primary developer” in his site bio), but his ideas sure are.

Not surprisingly, Breitbart is taking undercover agent/prankster James O’Keefe‘s side in the whole NPR “Tea Partiers are racist” affair that cost the jobs of both top fundraiser Ron Schiller and CEO Vivian Schiller (no relation). What makes his take unique, however, is that Breitbart blames liberals for their demise, claiming that their insistence on labeling the Tea Party racist is what causes people like Ron Schiller to feel comfortable asserting those claims, inevitably causing them harm. And the focal point of these attacks, Breitbart insists, are the claims by Reps. Andre Carson, John Lewis, and a host of others that an “angry mob” of Tea Partiers shouted racial epithets at them in Washington last year. “Remember the protests on Capitol Hill last March against ObamaCare, and the media’s lie that members of the Congressional Black Congress had awful racial slurs hurled at them by Tea Party members that weekend?” Breitbart asks.

Most media junkies will say “yes;” most average news-watching Americans will have long forgotten, though perhaps vestiges of a belief in the Tea Party being, as Schiller put it, “scary racists” remain. As long as they do so, Breitbart will continue publicizing his video evidence of that incident not having occurred– or at least video evidence, as he did last year, of a crowd surrounding the Congressmen at the event. This time around, he has four videos to serve as Rorschach tests on the matter, with enough time passing in between then and now for cooler heads to take a second look.

Given the rapidfire speed of our 24-hour news cycles, going back a whole year to look at an instance in which a crowd may or may not have shouted a racial epithet seems like far too much work for the payoff. Breitbart counters that claim by noting that the footage left a near-indelible blemish on the Tea Party that needs to be removed. People like NPR’s Ron Schiller still believe the Tea Party is racist based on this story, he argues. Furthermore, those on the left that support them are willing to make them sacrificial lambs in order to preserve a semblance of objectivity. “They will do almost anything to preserve the dogma of political correctness and the aura of self-righteousness that surrounds the left,” Breitbart writes. “That’s why NPR threw its fundraiser, its chief executive, and itself under the bus. They sacrificed for the greater political cause.”

And yes, it bears repeating: this argument– that the racism accusations on the Tea Party are lies and only liberals are hurt by them– is on the cover of the Huffington Post. What’s even more impressive is the lack of visceral rejection in the comments section. Not that Breitbart’s views were exactly welcomed by the HuffPost community with open arms, but many commenters were actually happy to have the opportunity to interact with Breitbart’s arguments on their home turf. For example, one of the most negative comments thanks the site: “Kudos to HuffPo for posting this guy’s views. His presentati­on is one-sided and factually inaccurate­, but that can be addressed in the comments and/or by other writers.” The negative comments appeared to only go as far as to mention Shirley Sherrod or call the article “self-serving and revisionist,” but detractors stuck firmly away from the ad hominem and engaged in fact-to-fact discussion. There are even some positive comments, like: “Great piece. When will these people get it: the Tea Party is all about free speech, free markets and limited government.”

So how is Breitbart himself taking the news that one of the biggest liberal political sites in America is comfortable reading him and discussing his work, contrary to an image routinely perpetuated in the pages of the Big sites that the American left is incorrigibly closed-minded and elitist? When Mediaite caught up with Breitbart, he admitted to being “pleasantly surprised” by the commenters and found the unexpected civility promising, even leaving the door open for further collaborations with the site. “I think if the mainstream media are willing to look at these videos and compare to [Rep. Andre] Carson’s outrageous and provably false accusations, then maybe there will be some justice for the Tea Party and what it has had to bear for this accusation.” He even extended an olive branch, of sorts: “Perhaps we may end this electronic warfare between the James O’Keefes of the world and the mainstream media, because he’s trying to expose the corruption that exists in the mainstream media that would allow for blockbuster revelations like these videos to not come to bear.”