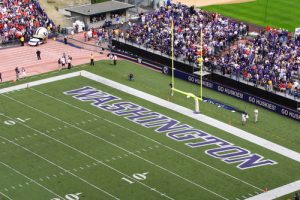 Rivalry weekend in college football is upon us. And the first major game of the weekend takes place out in Pullman, WA — where the No. 5 Washington Huskies square off against the No. 22 Washington State Cougars in the 109th edition of the Apple Cup.

Washington’s playoff hopes appeared to take a serious hit when they lost to USC on Nov. 12. But a string of losses from teams ahead of them have put the Huskies right back in solid contention. Given that the Ohio State-Michigan loser is all but certain to fall out of the race, back-to-back wins over the next two weeks should put the Huskies in the four-team tournament for the national championship.

But the first of those two wins won’t be easy to come by. Washington State enters the Apple Cup off of a loss to Colorado last Saturday. But prior to that, the Cougars had won eight straight games. Not only can they deny their in-state rival a potential playoff berth, they can also win the Pac 12 North title and earn a spot in the conference championship game. Lots on the line today in Pullman.

Kickoff is at 3:30 p.m. ET. The game will air on FOX. Gus Johnson and Joel Klatt have the call. The action can be streamed free with a cable subscription on pc, cell phone, or tablet via Fox Sports Go — which can be downloaded via the iTunes store, the Google Play store, and the Windows store.