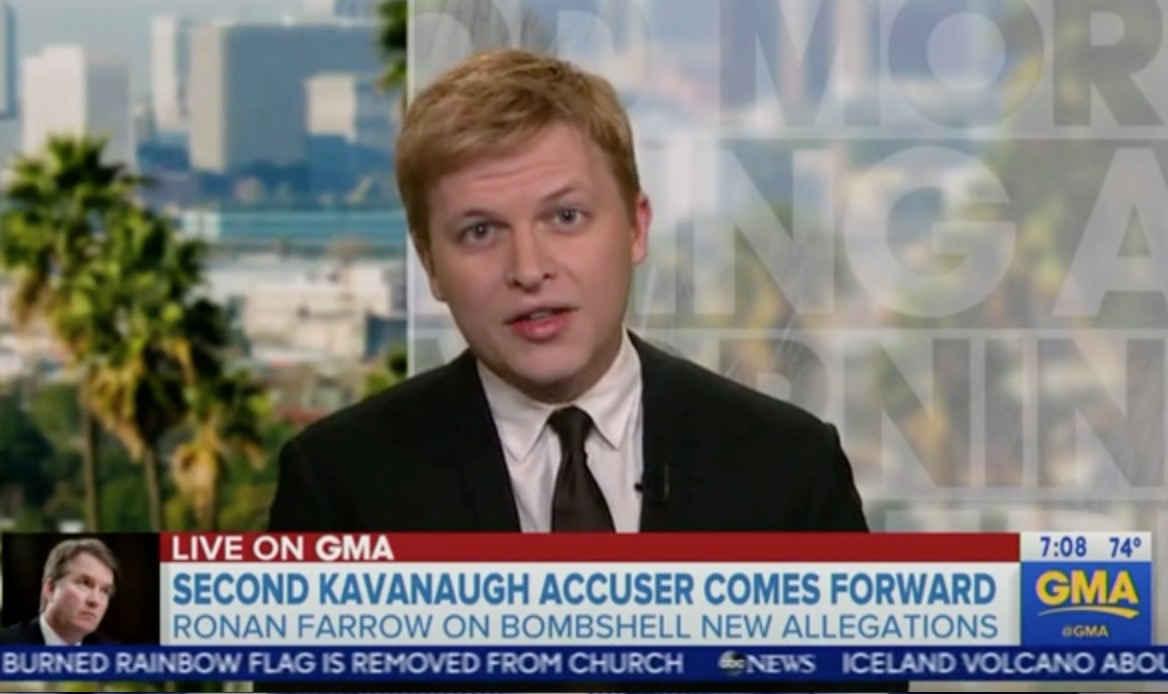 Late yesterday, media darling Ronan Farrow, along with co-writer Jane Mayer, published an allegation of sexual misconduct against current Supreme Court nominee Brett Kavanaugh in the New Yorker. There are so many examples of journalistic malpractice in the piece that I feel compelled to go through at least some of the many lowlights by taking direct quotes from the article and annotating them in the order in which they appeared.

This is what is called the news “hook.” The basis for why the allegation is newsworthy. The standard here used to be a criminal charge or at least a legitimate lawsuit, but now if unnamed partisan political operatives, with a huge self-interest to push a damaging story regardless of its truth, simply get information and say it ought to be looked into further, this now reaches the threshold for publishing?!

Or, more likely, is this dangerous new rule only in effect when Democratic senators want more time to torpedo a damaged Republican Supreme Court nominee?

“The New Yorker contacted Ramirez after learning of her possible involvement in an incident involving Kavanaugh. The allegation was conveyed to Democratic senators by a civil-rights lawyer.”

The way I read this, a Democratic lawyer, gave the allegation from a Democrat accuser to Democratic senators, who then leaked the information to a liberal publication. Gee, what could possibly go wrong here?

“She was at first hesitant to speak publicly, partly because her memories contained gaps because she had been drinking at the time of the alleged incident. In her initial conversations with The New Yorker, she was reluctant to characterize Kavanaugh’s role in the alleged incident with certainty.”

So 35 years after the alleged incident, one which their accuser admits she was drunk, it sure sounds like she had no clear idea what really did or didn’t happen. This is the moment when Farrow and Mayer should have moved on from this story, or at least found numerous corroborating witnesses (spoiler alert: they have none).

“After six days of carefully assessing her memories and consulting with her attorney, Ramirez said that she felt confident enough of her recollections to say that she remembers Kavanaugh had exposed himself at a drunken dormitory party, thrust his penis in her face, and caused her to touch it without her consent as she pushed him away. Ramirez is now calling for the F.B.I. to investigate Kavanaugh’s role in the incident.”

Say what?! 35 years after the incident she can’t tell her story but 35 years and six days later, after speaking with her Democratic lawyer, she can suddenly recall the amazing and graphic details?! Ramirez is apparently the first person in history to have a far better memory of something that supposedly happened 35 years ago while badly drunk after having spoken to someone who was not there. She’s also parroting the Democratic talking points on an F.B.I. investigation for Dr. Christine Blasey Ford, which is surely coincidental.

“The New Yorker has not confirmed with other eyewitnesses that Kavanaugh was present at the party.”

As Tom Hanks might say, “Uh, Houston, we have a problem.”

“A classmate of Ramirez’s, who declined to be identified because of the partisan battle over Kavanaugh’s nomination, said that another student told him about the incident either on the night of the party or in the next day or two. The classmate said that he is “one-hundred-per-cent sure” that he was told at the time that Kavanaugh was the student who exposed himself to Ramirez.”

This ominous-sounding account is actually anonymous 35-year-old hearsay that even The National Enquirer would have a tough time justifying.

“In a statement, two of those male classmates who Ramirez alleged were involved in the incident, the wife of a third male student she said was involved, and three other classmates, Dino Ewing, Louisa Garry, and Dan Murphy, disputed Ramirez’s account of events.”

So we have an accuser, who was drunk, and whose only possible witnesses say that she isn’t telling the truth. Again, this is a significant problem.

“Ramirez is a registered Democrat, but said that her decision to speak out was not politically motivated and, regarding her views, that she “works toward human rights, social justice, and social change.”

This should have been right at the top of the story, especially since everyone else involved in this allegation is a Democrat, as is the case with Dr. Christine Blasey Ford.

A person with no direct knowledge of the incident (given that he lived with Kavanaugh it sure is really weird that he doesn’t!) says that her story is “believable”? Yeah, that definitely does not meet the standard for being reported in a news outlet, even if the subject matter wasn’t so incredibly politically charged.

“A third classmate, who Ramirez thought had attended the party, said that she was not present at the incident. The former student, who asked not to be named, said that she also found Ramirez credible.”

Wait. Yet another anonymous person directly contradicts Ramirez’s story, has no corroborating information, but is allowed to express her opinion that Ramirez is “credible”? This is worse journalism than quoting someone’s mother.

“I believe it could have happened,” another classmate who knew both Kavanaugh and Ramirez said. Though she was not aware of Kavanaugh being involved in any specific misconduct.”

I doubt that there has ever in the history of legitimate journalism been anyone who thought it was remotely okay to use the quote “I believe it could have happened” from an anonymous person with absolutely no direct information about something which might have happened 35 years ago where there are no corroborating witnesses.

“Ramirez said that she continued to socialize with one of the male classmates who had egged Kavanaugh on during the party during college; she even invited the classmate to her house for Thanksgiving one year, after he told her that he had nowhere to go. She also attended his wedding, years later, as a guest of his wife, and said that she posed for photographs with Kavanaugh, smiling.”

This is where the article becomes effectively the work of Ramirez’s PR team as The New Yorker proactively protects her from the damaging revelation of a photo of her and Kavanaugh smiling together well after the fact.

I emailed both Ronan Farrow and Jane Mayer regarding my problems with the reporting of this story. As of last night, Farrow had not responded, but Mayer sent me this:

“If you think an on the record interview with a classmate at Yale accusing a Supreme Court nominee of misconduct of this sort, and calling for an FBI investigation, backed up by a fellow classmate who recalled learning of it contemporaneously who has discussed it with other classmates for 35 years, whose emails document that they were discussing this widely before other allegations of sexual misconduct arose, and who went to four senators with the information, at least two of who initiated investigations, is not a legitimate story, you and I have serious differences on the definition of news.”

For the record, anyone can call for an FBI investigation (the minimum standard used to be “the FBI is investigating”), none of those people she refers witnessed the event, and the article itself says that Ramirez told her story hoping to support Ford’s claim, which implies that her decision to speak out, the key factor here, took place after “allegations of sexual misconduct arose.”

The bottom-line is that this story had no business being published and might not be based in truth. Sadly, the truth no longer matters. Consequently, it will take a near miracle now for Brett Kavanaugh to be confirmed and for the GOP to still hold the Senate after November.