Behind the Scenes in Miami: Media Crowns Harris Winner — And Wonders If Biden Has What It Takes 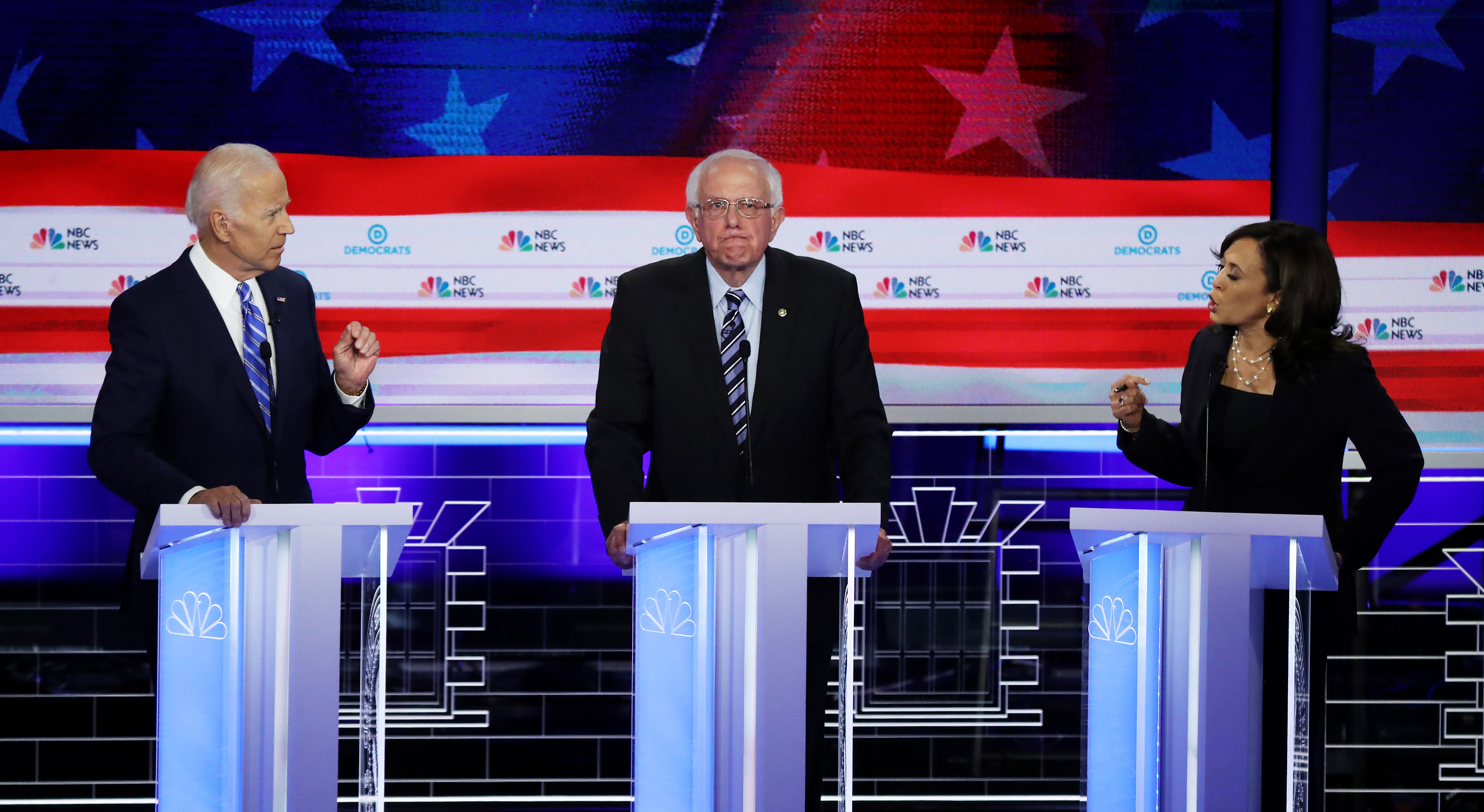 MIAMI — Following two nights in South Florida for the first Democratic debates, a clear winner has been crowned by the media, in such a dramatic fashion it’s likely to completely upend the way this race will be covered going forward: Kamala Harris

The second night of the first Democratic presidential primary debates was decidedly more compelling than the first, in which Elizabeth Warren and an ascendant Julián Castro coolly faced off against a throng of quasi-bilingual candidates eager to show off their Spanish.

Night two — with Bernie Sanders, Joe Biden, Kamala Harris, Pete Buttigieg and several other top-tier candidates who left their own marks sharing the stage — quickly devolved into a bloody fistfight after young Congressman Eric Swalwell told old vice president Biden it was time to “pass the torch” to a new generation of leadership.

Biden’s response set off a frenzy of shouted cross talk, and NBC’s moderators lost control — until Harris stepped in.

“Hey guys, you know what, America does not want to witness a food fight,” Harris said, quelling the disarray. “They want to know how we’re going to put food on their table.”

The line was canned, but it still landed in the room, drawing cheers and applause from the live audience.

It was a preview for the most jaw-dropping moment of the evening: a prepared but powerful assault from Harris, a former prosecutor, on Biden, over his civil rights record.

“I would like to speak on the issue of race,” she said, before turning to the front runner, who earlier this month sparked controversy by reminiscing on working with segregationist senators.

“I do not believe you are a racist and I agree with you when you commit yourself to the importance of finding common ground,” she said. “But, I also believe—and it’s personal. It was hurtful to hear you talk about the reputations of two United States senators who built their reputations and career on segregation of race in this country. And it was not only that, but you also worked with them to oppose bussing. And you know, there was a little girl in California who was part of the second class to integrate her public schools and she was bussed to school every day and that little girl was me.”

NBC’s moderators let the ensuing fireworks go off without protest. Biden was defensive, accusing Harris of mischaracterizing his record. The devastating exchange was only brought to an end by Biden surrendering: “Anyway,” he said, “my time is up.”

“Kamala Harris knocked it out of the park,” Baier told Mediaite. “I think she won not only tonight, but both nights, because of that moment with Biden. She managed to create numerous moments. And she planned to, but did it well, executed it well. I come out of these two nights saying she’s now in a much different place than she was just a few days ago.”

“Biden lost,” the Fox anchor said. It wasn’t just the Harris onslaught that hobbled him either. Biden’s odd response to the question of what his first priority would be as president — “The first thing I would do is make sure that we defeat Donald Trump” — was a self-inflicted mistake.

MSNBC’s Chris Matthews — who on night one declared Biden winner of a debate in which he didn’t participate — sang a different tune after Thursday’s showdown when he asked Harris in an interview from the spin room: “Is Biden finished?”

“A star was born tonight,” Van Jones said on CNN. “This is a masterful performance. She completely dominated the stage and most importantly she would kick Donald Trump’s butt and she proved it tonight.”

Sinclair host Eric Bolling, between interviews with candidates in the spin room, echoed the consensus in comments to Mediaite. “The clear winner was Kamala Harris,” he said, pointing to her confrontation of Biden going viral on social media. “She went after the frontrunner and really pulled it off. She delivered the best performance of the whole two nights.”

After that performance, Bolling predicted that in light of the strong economy, “Kamala Harris is the only one who has a shot taking on Trump.”

And Biden? “He looked like a deer in headlights.”

“If I were a Democrat, I would be getting solidly behind Kamala Harris,” he added.

Cenk Uygur, the host and founder of progressive network The Young Turks, told Mediaite that Harris’s win Thursday night was “obvious.” Uygur still had praise for Bernie Sanders, a favorite of his audience: “Best summation for explaining we can’t get any of these lovely plans done if we don’t tackle corporate power,” Uygur said. “Best foreign policy and the track record to prove he was right about keeping us out of wars.”

Biden? “He is still bleeding from the ear. Don’t ask him if he’s alright. No wonder he was against busing because Kamala Harris just threw him under one.”

Pithy barbs about the definitive Harris exchange aside, reporters and pundits in the spin room Thursday night noted that, more than anything, Biden simply looked worn out. With 494 days to go until the election, some wondered if he has what it takes. And as the evening’s candidates made their way into the spin room at 11 p.m. for gaggles with reporters and interviews with Chris Matthews, one candidate had noticeably retired: the frontrunner.